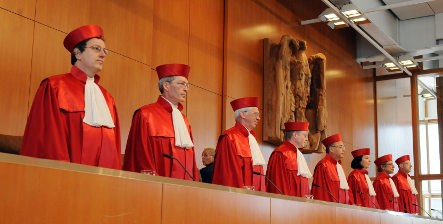 “The ratification document of the Federal Republic of Germany may not be adopted until the sufficient legal groundwork for parliamentary participation as foreseen in the constitution has been laid,” the Federal Constitutional Court said.

“If one wanted to summarise this result, one could say: the constitution says ‘yes’ to the Lisbon Treaty but demands that parliament’s right to participation be strengthened at the national level,” the court said.

“The court is confident that the last barrier for adopting the ratification document will be cleared.”

the bloc a stronger voice on the world stage – must be ratified by all 27 member states before it can come into force.

Although the treaty was approved by a large majority in both houses of the German parliament, the country’s president Horst Koehler has held off on the final ratification step pending the judgement.

“The Constitutional Court has established that the constitution says yes to the Lisbon Treaty,” Merkel said in a statement to reporters Tuesday.

She said the government would do all it could to be “helpful” and ensure that parliament could make the necessary changes when it meets in special session to address the court’s concerns.

European Commission chief Jose Manuel Barroso expressed confidence Tuesday that the EU’s reform treaty would be ratified across the bloc by autumn, following a court ruling in Germany.

“I welcome the judgement of the German constitutional court,” he said in a statement. “I am confident that we can complete the process of ratification of the Treaty of Lisbon in all countries by the autumn.”

Barroso said he believed the ruling “has cleared the way for a swift conclusion of the German ratification of the Treaty of Lisbon, and I welcome the intentions already stated in this respect by German legislators.”

Following the court’s judgement, a spokeswoman for the centre-left Social Democrats announced that Germany’s parliament would hold special sessions on August 26 and September 8 to debate a law allowing the treaty to pass.

A German member of the European Parliament, Jo Leinen, told AFP: “The political will is there, there will be no delay.”

“I can well expect this to happen as quickly as possible so that the ratification … is not slowed down any more,” he said, adding that the exact timeframe was still unclear.

“There is enough time. There are enough legal experts in both parliamentary chambers to be able to find the correct formulation … the Bundestag and the Bundesrat now have to sit down and get down to work,” he said.

So far, 23 out of the 27 countries in the EU have ratified the document.

In a shock result that plunged the EU into an institutional crisis last June, Ireland voted 53-47 against the reforms in a referendum – the only country to put the document to a popular vote.

Irish voters are poised to vote again – probably in October – after receiving guarantees the treaty would not affect issues close to Irish voters, such as military neutrality and abortion.

Following the surprise vote against the reforms, opinion has swung in favour of the Lisbon Treaty as the global financial crisis has hit the former “Celtic Tiger” economy harder than most.

The eurosceptic Czech and Polish presidents have said they will not sign the Treaty until Ireland has voted again.