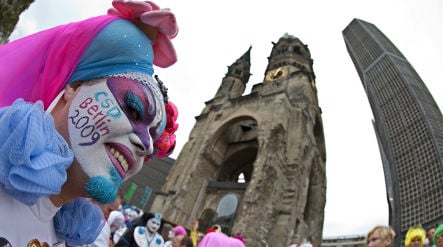 Kicked off by the city’s openly gay mayor Klaus Wowereit and his partner Jörn Kubiki, the parade marched under the motto, “Step for step into homo-happiness – all rights for all” mixing the outlandish costumes and plenty of bare flesh with politics.

This year the parade focussed on calls for a constitutional amendment to include sexuality in the list of features upon which discrimination is fundamentally banned. Organisers said around 50,000 more people turned up than last year.

Wowereit said it was high time that the constitution was changed to protect homosexuals from discrimination but said he expected little from the current houses of parliament, where a two-thirds majority is needed for such an amendment.

He also called for the rehabilitation of gays who were prosecuted and persecuted under the pre-1969 German laws which banned homosexuality. He said they deserved compensation. “We cannot and will not forget what happened. We have to fight every day that people are not discriminated against and excluded,” he said.

Lawyer Till-Alexander Hoppe from Kiel was dancing in the parade, his naked upper body covered in gold glitter, said that the political aspect was important to him: “As well as all the fun, I think the parade must also have a message.”

Writing articles in gay publications, Hoppe said he offers legal advice to people about their rights and how they can assert them. “Sadly there is often an ignorance about political topics in many gay magazines as well as in the community,” he said.