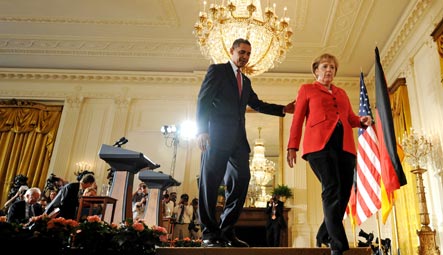 After talks at the White House, the two leaders demonstratively closed ranks on array of issues amid persistent chatter there was discord between the key transatlantic allies.

“I’ve now dealt with a lot of world leaders, and I think that Chancellor Merkel is smart, practical, and I trust her when she says something,” Obama said at a joint press conference.

Calling Merkel his “friend,” Obama said he would always have “warm place” in his heart for Germany.

He then turned matters the two discussed including unrest in Iran and climate change. He labelled recent events in Iran “unacceptable” and rejected a call by President Mahmoud Ahmadinejad for him to apologise for supposedly meddling in Iranian affairs.

Merkel also condemned the repression in Iran in the wake of Ahmadinejad’s controversial reelection, saying scenes of violence against protestors had been “shocking.”

“We will not forget this,” Merkel said.

Obama and Merkel also touted a climate change bill being debated by the US Congress Friday as representing “enormous progress” but said more needed to be done.

“I’m the first one to acknowledge that the United States over the last several years has not been where we need to be,” Obama said.

Obama said the United States had to work with industrialised countries like Germany and with the world’s emerging economies, where rapid growth will translate into rising greenhouse emissions, to achieve international rules to deal with global warming.

“Europe, in many ways over the last several years, has moved more rapidly than the United States on addressing this issue,” Obama said. “And I’ve been very blunt and frank with Chancellor Merkel that we are still working through creating the framework where we can help lead the international effort.”

Careful not to comment directly on the US legislation, Merkel said she was gratified by Obama’s total commitment to the climate change issue and to making the Copenhagen conference a success.

The two leaders also “reaffirmed our commitment to a more substantive relationship with Russia,” Obama told the White House press conference. “Working with the Russian government on issues where we agree and honestly confronting those areas where we disagree.”

Obama is due to visit Russia on July 6-8 in a bid to improve relations with Moscow that frayed under the administration of his predecessor, George W. Bush.

Merkel said Obama’s Russia visit would be important for Germany and the European Union.

“We have every interest also in seeing a very good relationship between the United States of America and Russia,” she said, highlighting the important role Moscow could play in the current crisis over Iran’s suspected nuclear weapons programme.

“We want to forge a common position wherever possible with Russia, but also with China,” she said. “We’ve done that over the years in the format of the United Nations with a number of resolutions, and that needs to be continued.”