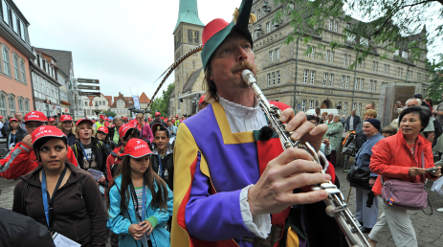 The tale of the travelling man who rid the mediaeval town of its rats but was refused his promised fee and took revenge by enchanting and kidnapping the children, has made Hamelin in Lower Saxony a worldwide tourist attraction.

The town even employs a rat catcher, Michael Boyer, who is paid to play the flute and entertain visitors.

On Friday he put on his best costume and played his music to more than 1,000 children, who followed him through the town in a recreation of the original abduction.

They went on a 15-kilometre walk – for which the children had found sponsors – with the money raised to be donated to a children’s charity.

The event was seen off by Ian Anderson, lead singer and flautist with British folk-rock group Jethro Tull, due to play a concert in the town in the evening.