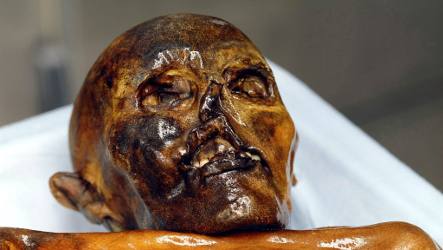 Nuremburg resident Helmut Simon and his wife Erika discovered Ötzi sticking out of the ice in the Similaun glaciar in northern Italy while on a hike in September 1991. Simon died in a climbing accident in the Austrian Alps in 2004.

Until his death, Simon had battled the South Tyrol government over some kind of financial reward for finding Ötzi.

“We are happy to finally bring the exasperating topic to a close,” Christian Rainer, a spokesman for South Tyrol government said. “Now it will finally be quiet.”

The money will go to Erika Simon and her two sons.

Simon and South Tyrol had gone to two court twice over the case. Simon had lost both times in court, South Tyrol will pay for his legal expenses in those cases.

The family will pay its other legal costs.

Another lawyer for the family, Elohim Rudolph-Ramierez, said Simon pursued the cases vigourously out of a desire for recognition.

“The process was not started because Simon wanted to divvy the profit,” the attorney said. “He had the feeling he had achieved something amazing. He really identified with the cause. It was important to him to be truly recognised.”