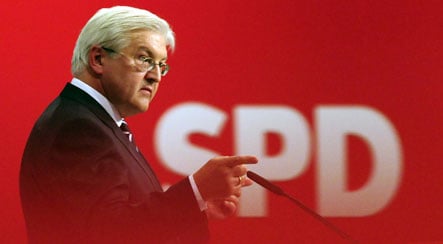 Steinmeier addressed a convention seeking to galvanise the centre-left SPD demoralised by a series of electoral defeats, culminating in a crushing loss in last Sunday’s European elections.

“We have the right answers to the crisis, I am totally convinced. We have the right programme for the future of our country … Germany needs a Social Democratic chancellor. Together we will achieve that. We want to win and we will win,” he said.

Calling on the enthusiastic, banner-waving crowd to launch a “fiery election battle” with Merkel, he said he wanted to be “chancellor for all Germans.”

“I tell you, this thing is open and we will keep it open and we will win out in the end,” said the 53-year-old, who since 2005 has been foreign minister and vice-chancellor under Merkel in Germany’s unwieldy grand coalition government.

The SPD received a drubbing in last weekend’s European Parliament elections, drawing just 20.8 percent of the vote, a record low. An opinion poll last week showed Steinmeier, more than 30 percent behind Merkel as the Germans’ preference as chancellor.

“Last Sunday was not a good day. It was rubbish. I was angry like you,” Steinmeier said. “But today is a new Sunday. Today we are here to look forward.”

The 500 delegates meeting in Berlin hope the speech will mark the turning point for the party’s fortunes. Steinmeier himself told the newspaper Bild am Sonntag it was “the most important speech of his political career.”

Steinmeier tried to make the argument how he would solve Germany’s problems differently than Merkel, who is seen by many Germans as a cool and disciplined leader in times of economic crisis.

But as foreign minister and vice-chancellor in a coalition government with Merkel’s centre-right Christian Democrats, Steinmeier will have to walk a fine line in the next three months

The SPD also hopes its election platform of tax cuts for lower-income workers and tax hikes on wealthier Germans will help it turn the tide to unseat Merkel’s conservatives.