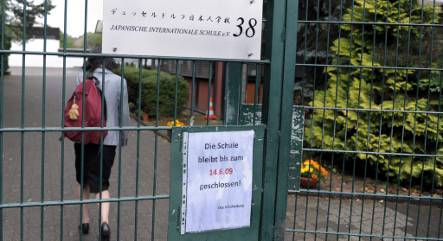 The school in Düsseldorf, which has Germany’s biggest concentration of Japanese, has been closed since Tuesday. The infected children are under quarantine at home, health officials said.

“The city of Düsseldorf is doing everything it can to identify infected people as quickly as possible,” Mayor Dirk Elbers said in the statement.

Health officials reported more cases of the swine flu Friday, including two small children in Munich and an army officer in Lower Saxony.

A five-year-old boy and a three-year-old girl at a Munich kindergarden were sickened by the virus, a spokeswoman for the state health office confirmed Friday. The newest cases bring the total number of swine flu infections in Bavaria to 25.

A 36-year-old army officer from Lower Saxony was also diagnosed with the H1N1 flu virus. He was likely infected while on a training trip to the US, the military reported Friday, and is recovering at home. The other 59 soldiers on the trip show no symptoms of the flu and are being monitered by the military’s medical service.

Before the latest cases in Düsseldorf were identified, Health Minister Ulla Schmidt said Thursday that a total of 108 people had been diagnosed with swine flu in Germany.

On Thursday, the World Health Organisation raised the global pandemic alert level to its highest stage as the swine flu epidemic spreads around the world. It’s the first time the WHO has declared a global influenza pandemic in 40 years.

The WHO has registered almost 30,000 cases in 74 countries. At least 144 patients have died though there have been no reported deaths in Germany.