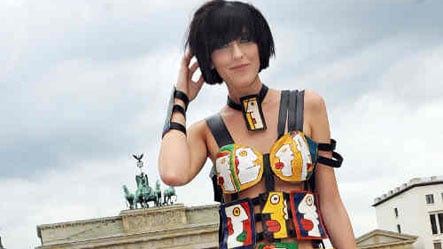 Daniel Rodan, an active designer selling leather clothing on Berlin’s famous shopping street the Ku’damm for 30 years, wanted fashion commemorating the 20th anniversary of the fall of the Wall to be more than dates on t-shirts. He was inspired by the city’s East Side Gallery that shows painted pieces of the Berlin wall. The result is a colourful collection called “Mauerkleider: East Side Gallery goes Fashion” showing at the Hotel Adlon in Berlin.

See some of Rodan’s collection: East Side Gallery goes Fashion

Twenty motifs were taken straight off the wall and onto the runway as the 50-year-old designer worked with the artists on display at the gallery to transform their works onto leather.

At the end of the exhibition in 2010, the pieces will be auctioned off for charity.