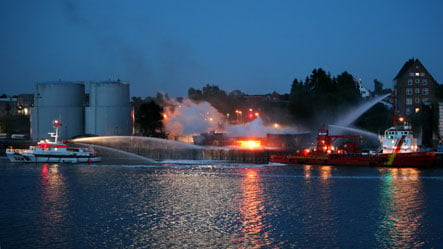 Some 300 firemen battled the flames all night, as the authorities brought around 500 residents near the North-Baltic Sea Canal to safety. Only two people suffered light injuries in the incident.

Michael Krohn, a spokesman for the Kiel fire brigade, said they received a call just before midnight regarding a burning trashcan. But by the time the first truck arrived, a nearby tank filled with paraffin had caught fire. The heat caused several tanks to explode.

“Then large amounts of burning paraffin quickly flowed into the canal,” Krohn said.

The highly flammable material, which is often used to make candles and creams, fuelled flames up to 15 metres high. Several hundred onlookers hampered efforts to contain the blaze, which threatened to spread to tanks of heating oil.

Several boats including a fire brigade craft with water canons took part in the mission, which had the fire under control around 3:30 am.

“There’s never been anything like this in Kiel,” said Ulrich Hackenberg from the fire department.