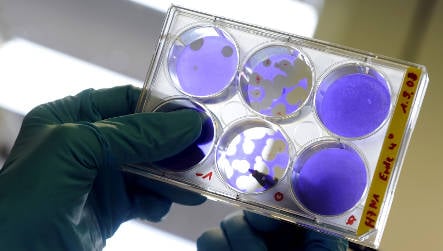 Five latest people with the virus were infected in Germany, the Robert Koch Institute reported on its website. Since the outbreak first started, 86 cases have been diagnosed in Germany.

In 51 of the cases, the patient was infected in the United States, according to the institute. Twenty-one cases were the result of infections taking place within Germany. The state of Bavaria has the most infections, with 22 confirmed cases.

Among the new infections, officials in Cologne confirmed Wednesday that four students at the same high school had been diagnosed with swine flu. A 13-year-old girl was the first to show flu symptoms on Sunday and three of her classmates have also been diagnosed with the virus.

All four students are being treated at home, city officials said. Parents of other classmates have been asked not to send their children to school and coursework for the entire class has been cancelled.

The German navy also confirmed Wednesday that a sailor aboard the navy frigate Sachsen was diagnosed with swine flu. The man has already recovered and no other crew members displayed flu symptoms.

The navy’s chief doctor, Admiral Rainer Pinnow, said the sailor came down with the flu on May 22, shortly after the vessel left the Canadian port of Halifax. The sailor was isolated and immediately treated with Tamiflu.

“The therapeutic and prophylatic measures were certainly the decisive factors for the successful prevention of further infections on board,” Pinnow said.

Jörg Hacker, director of the Robert Koch Institute, said Tuesday he expected the World Health Organisation would soon raise its global pandemic alert to its highest level. Hacker said the flu had reached all of the necessary conditions for the highest alert level, including person-to-person transmission of the virus on at least two continents.

Vaccine production should being shortly, Hacker said, with enough vaccine available for widespread distribution by autumn, when flu season begins in the southern hemisphere.