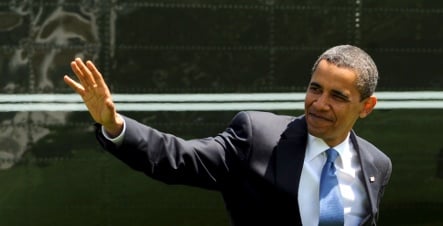 Obama is to arrive Thursday in Dresden after stops in Egypt and Saudi Arabia aimed at bridging the divide between the Muslim world and the West.

He will continue on to Buchenwald Friday and pay a visit to wounded US troops in Landstuhl medical centre before wrapping up the trip in France at the 65th anniversary commemorations of the D-Day landings in Normandy.

Dresden, a Baroque jewel once known as Florence on the Elbe, was flattened by Allied bombing during World War II, killing an estimated 35,000 people.

It has undergone a dramatic restoration since the Berlin Wall fell in a peaceful revolution 20 years ago, paving the way to German unification in 1990.

Obama is to tour the city with Chancellor Angela Merkel, who grew up in the communist east of the country, before they sit down to political talks and hold a joint press conference.

Obama remains extremely popular in Germany, nearly a year after he drew a rapturous crowd of 200,000 to the streets of Berlin as a candidate.

An Obama aide said he and Merkel had discussed life behind the Wall during a meeting in Berlin last year and on the president’s European tour in April.

“I think he looks forward to an opportunity to see the major changes in the former East,” said deputy national security advisor for strategic communications Denis McDonough.

Many historians have questioned the military strategy behind the all-out bombardment of Dresden, while Germans have in recent years tentatively begun to discuss their suffering during the war that they acknowledge Hitler started.

Conservative US bloggers have accused Obama of planning an “apology” for the raids in 1945 that destroyed three-quarters of the city.

German commentators said Obama was more likely to cite the battle against Nazi Germany and the courage it took to face down communism as shining moments that could fuel the resolve needed to vanquish Islamic militants today.

“The message is that freedom requires sacrifice. America made this sacrifice and is still making it. Now it is Europe’s turn,” the conservative Welt am Sonntag newspaper wrote this week, predicting a US request for more German troops in Afghanistan after the German election in September.

Obama will pick up the theme of sacrifice when he stops 200 kilometres (120 miles) to the west in Buchenwald, set up by the Nazis in July 1937 and where more than 56,000 prisoners died under horrendous conditions.

McDonough said Obama would “underscore the terrible tragedy, the undeniable tragedy of the Holocaust (and) recognise the work of so many people to stop that, including his own uncle”.

Obama’s great-uncle Charlie Payne took part as an army private in the 1945 liberation of Ohrdruf, a forced labor camp that was a satellite of Buchenwald.

“I remember seeing a lot of really emaciated people in rags at the point of starvation. People were clutching tin cups for food,” he told the Chicago Tribune last month. “I saw sheds where dead bodies had been stacked up.”

The director of the foundation running what was one of the biggest concentration camps on German soil, Volkhard Knigge, welcomed Obama’s visit, saying it honoured the memory of the camp’s legions of victims.

“This is not a museum,” he told AFP. “You are walking on soil soaked in blood here, literally not figuratively.”

The Nazis marched Wiesel with thousands of other prisoners from Auschwitz in occupied Poland to Buchenwald. His father died there months before the Americans reached the camp.