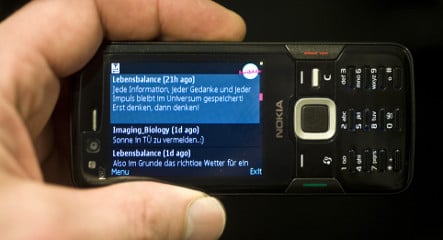 And on the seventh day they rested. Photo: DPA

More than 3,000 participants used the micro-blogging service to “tweet” their own “wonderful and sometimes very humorous” summaries of Bible sections, the Church said on Saturday in Frankfurt.

Participants had from between May 20 at 6 pm to May 30, but they managed to finish 37 hours ahead of schedule, church officials reported.

Theologians divided the religious tome into 3,906 sections, and each summary tweet, confined to Twitter’s 140-character limit, was posted in order on the church’s blog.

The combined summary will be released as a book in mid-October at the Frankfurt book fair, the officials said.

One tweet describing God’s day of rest after the creation in the book of Genesis read: “Thank God! It’s Sunday!”

Meanwhile the Catholic diocese of Limburg – which includes parts of the states of Hesse and North Rhine-Westphalia – became the first in Germany to establish its own Twitter feed.

The Church hopes to “build a bridge of communication between heaven and earth” with the new technology, Bishop Franz-Peter Tebartz-van Elst said on Saturday, adding that it’s a “real challenge to transport something substantial through the virtual.”

But the technology shouldn’t be used “just for playing, wasting time, or escaping reality and remaining superficial,” he said.

The Vatican as well as many dioceses in the US already use Twitter.