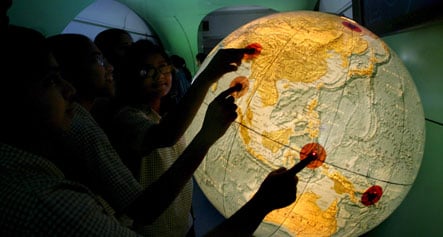 These and many others are the questions posed and answered on the “Science Express” – an innovative mobile exhibition showcasing cutting-edge German technology that has raised interest as far afield as India and China.

The exhibition, which is set to visit 60 German cities by November 2009, is staged on a modified 12-carriage train, each car dealing with a different aspect of science, from cosmology to particle physics and evolution.

When the train rolled onto platform two at Berlin’s futuristic central station, people were queuing up to visit the free displays. Peter Steiner of the Max Planck Society, which runs the train along with some of Germany’s leading companies such as Siemens and Volkswagen, was delighted with the public response to the project, which was officially opened by Chancellor Angela Merkel on April 24.

The institute aims to have 250,000 visitors across Germany, he said, adding: “but at this rate, we will easily beat that.” It is “not yet decided” whether the train will go outside Germany, Steiner said, confirming that “there is demand” from China, France, India and Poland. “We want it to go farther,” he said, adding: “The research ministry also wants to take the train to other countries.”

He said that a similar train – a joint Indo-German multimedia exhibition still rattling around India – has attracted 2.25 million “passengers” in eight months.

One possibility might be to take the train to Shanghai for the World Expo next year, Steiner said.

In Berlin, the specially-painted train was attracting a wide variety of amateur scientists from commuters in suits to backpackers and schoolchildren and others just killing time before the 14:58 to Munich. Inside the train, there was little trace of the crisis within German industry. Every carriage showcased the latest leading-edge technology aimed at solving the problems faced in the 21st century.

Two exhibits were especially popular with children: a 3D face-scanner that could assess whether people were happy or sad from their facial expression and a driving simulator that judged them not on how fast they could go but on how little emissions the car produced.

The train also featured a “science lab” where visitors could conduct their own “research.”

Other popular exhibits included a “population ticker,” showing the current population of the world (over 6.7 billion and rising by about one per second) and a “climbing robot” capable of shinning up cables and pipes using a camera for its eye.

“In general, I think it’s a very good idea, great for the kids,” 34-year-old Paul Hoffmann told AFP, who visited the exhibition with his two sons Oliver, 12, and six-year-old Tosca.

“The best thing was the robot that could play football,” enthused Oliver, while his younger brother preferred the multi-coloured panels in the “house of light,” designed to showcase organic light-emitting diodes (OLEDs).

Ten-year-old Juergen was similarly keen on the exhibition.

“It was much better than doing science in school,” he said.