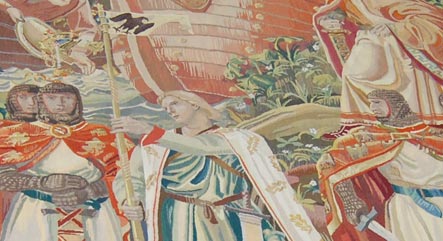 The 2.27 by 4.18-metre (7.4 by 13.7-foot) tapestry has been in police custody for two years pending the resolution of an ownership dispute, police spokesperson Markus Scharf told The Local. But it apparently didn’t gain any attention until a reporter from the Nordwest Zeitung happened to ask whether the station had anything interesting in its evidence vault this week.

“It is one of a triptych of tapestries ordered by the propaganda ministry in 1943, and finished in 1945,” Scharf said. “The image shows the sinking of the Nibelung treasure in the Rhine, from the old Norse mythological saga – and there are two swastikas embroidered on the top.”

Oldenburg police discovered the 64-year-old Nazi tapestry rolled up in a wool blanket in the trunk of a car belonging to a businessman under investigation for insolvency fraud by Rottweil police in the German state of Baden-Württemberg. They called on Oldenburg police several states away in Lower Saxony to assist the investigation, Scharf said.

The businessman apparently smuggled the tapestry out of East Germany in the 1980s, though it is not clear where he may have acquired it. In 2007, based on a fortune teller’s suggestion, the man drove the rug to Oldenburg, planning to sell it for a reported €300,000. But police caught up with him before the sale could be made.

The piece, from the looms of celebrated royal Parisian tapestry manufacturer Gobelins, is not evidence, though. Police simply still don’t know who the rightful owner is, Scharf said.

Five parties have claimed rightful ownership: the businessman’s family, the Federal Office for Central Services and Unresolved Property Issues (BADV), which specialises in restitution for property confiscated during the Second World War, the heirs of an antique dealer, and two other private individuals.

“The papers are with authorities and I have no idea how long it will take for them to decide who should have it,” Scharf told The Local, explaining that possessing Nazi paraphernalia is not illegal in Germany, as long as it is not openly exhibited.