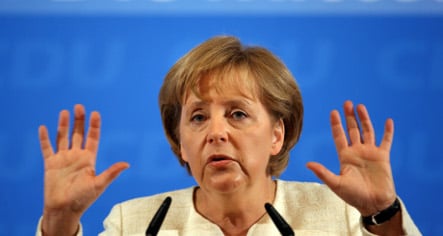 “We refuse to stretch out our hand to those who oppose the (EU) Lisbon Treaty… but at the same time talk about enlargement,” Merkel said. “Those who want more (Europe) have to cooperate,” Merkel said in Berlin at a campaign meeting for European elections in June attended by French President Nicolas Sarkozy on Sunday.

Merkel named no names, but a French MP listening to the speech said it was clear that it was the Conservatives’ leader David Cameron who was in her sights, with what he called his “disturbing” euroscepticism.

Britain has ratified the EU’s reforming Lisbon Treaty but Cameron wants to hold a referendum on it if elected. At the same time he supports Turkey joining to the EU – something opposed by both Merkel and Sarkozy.

“Angela Merkel is right,” Sarkozy said. “With Angela Merkel we want a Europe with institutions worthy of the name.”

A BPIX/Mail on Sunday poll put backing for Prime Minister Gordon Brown’s Labour Party at a record low of 23 percent – 22 points behind the Conservatives. The next British general election is due before June 2010.