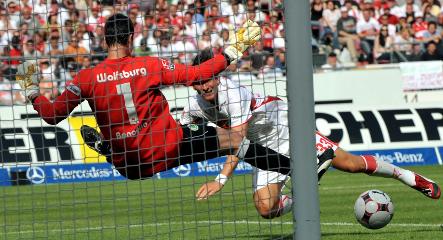 Germany striker Mario Gomez scored all four goals as Stuttgart inflicted a 4-1 defeat on league leaders Wolfsburg, who now lead only by virtue of goals difference.

Stuttgart, Hertha Berlin and Bayern all picked up three points to pile the pressure on Wolfsburg, with just two points now separating the top four teams.

Bayern took a 3-1 win at Energie Cottbus and caretaker coach Heynckes – who has three games left in charge while a replacement is found for sacked Jürgen Klinsmann – is already looking to Tuesday’s game against Leverkusen.

“We need to think about Leverkusen now and not about anything else,” said Heynckes, whose side also face Hoffenheim and Stuttgart before the season ends.

“It’s crucial not just to play convincingly, but also to put away the chances we create, and there were plenty.”

But the shock of the day was Wolfsburg’s humbling at Stuttgart – their second defeat in three weeks – meaning the league will almost certainly only be decided on the final day on May 23.

Gomez scored the first of his four-goal haul after just 30 seconds, a feat that will not have escaped the attention of Schalke, whom Stuttgart face on Wednesday.

“The team showed plenty of talent and, with a bit of luck, we managed to prevent the equalisier before we pulled away,” said Stuttgart coach Markus Babbel.

“If you see how many chances we created, we definitely deserved the win.”

With coach Felix Magath having said in midweek he will leave on June 30 to coach rivals Schalke, this was a bad week for Wolfsburg who began the weekend three points clear but finished it level with Bayern.

“It was only after we conceded the second goal that we started to settle into the game,” lamented Magath, whose side host Dortmund on Tuesday.

“Then we had a big chance to get the equaliser, but instead we conceded another goal. Stuttgart had a great game and deserved the win.”

Hertha Berlin are just a point off the leaders after they beat strugglers Bochum with goals by forwards Marko Pantelic and Brazil’s Raffael.

“Today we played against five defenders and four midfielders, which made life very difficult for us,” said Pantelic, whose side are at strugglers Cologne on Tuesday.

“But we played with a lot of energy and determination. Now we have to play as hard as we can up until the very end, because there is still everything to play for.”