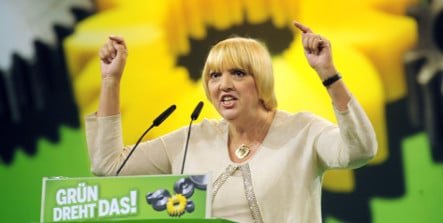 In order for either the Christian Democrat Union (CDU) or the Social Democrat Party (SPD) to be able to form a government without the other, they would most likely have to form a three-party coalition.

This could be a combination of the CDU, the Liberals and the Greens – the so-called Jamaica coalition named after the black, yellow and green colours of the respective parties which are like the Caribbean island’s flag.

The other three-way option would be the ‘traffic light’ coalition, made up of the SPD (red), Liberals (yellow) and the Greens.

Predicted election results would rule out the preferred options of CDU with the Liberals or the SPD with the Greens – thus making one of the three-way coalitions the only way to avoid a repeat of the current CDU-SPD coalition.

But at the weekend, the Green party conference ruled out taking part in a Jamaica coalition with the CDU and Liberals. Claudia Roth, party leader said they would not make up the numbers for a ‘neoliberal conservative’ government. “Jamaica remains in the Caribbean – and it is very good that this is the case,” she said.

Meanwhile Guido Westerwelle, head of the Liberal party told the Welt am Sonntag newspaper that he wanted to make it clear to everyone that he would not take part in a coalition with the SPD and Greens, but would only take part in a government with the CDU.

“Before I put myself up for election, I will make it absolutely clear that we want black-yellow,” he said.

He said the manifestos of the SPD, Greens and The Left Party, were practically the same. “That is why there will not be a traffic light coalition,” he said.

He said, “The Germans have to make a decision – is there still a structural majority for a civil government or is the slide to the Left going to continue?”