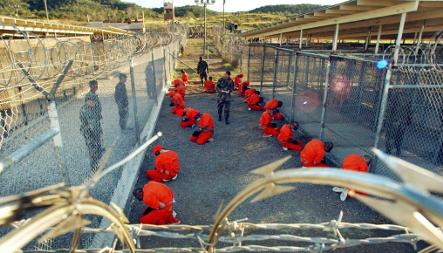 An American request long expected by the German government finally made it to Berlin a few days ago.

Dan Fried, the diplomat assigned by US President Barack Obama to help find ways to shut down the Guantánamo Bay terrorist prison camp, gave the Chancellery and the Foreign Ministry a list of approximately ten names of inmates that Washington is hoping will be taken in by Europe.

They belong to a group of some 50 prisoners – considered even by the previous Bush administration to be both innocent and not dangerous – who cannot return to their home countries for fear they will face repression or even torture.

Germany’s response to the American request was quickly divided along party lines: Wolfgang Bosbach, parliamentary spokesman for security matters for Chancellor Angela Merkel’s conservative Christian Democrats, said the United States or the inmates’ countries of origin were obligated to accept them – a particularly cynical argument considering the situation in those nations. He said Germany could not simply agree to take them since there was a “considerable risk” in doing so.

Such talk could threaten to make the issue part of Germany’s upcoming election.

But this wouldn’t simply be a humanitarian gesture. It’s about helping Obama put an end to the shameful prison camp on Cuba that has discredited the entire West. Europe and Germany have always pushed for doing just that. The German government should therefore not refuse to be part of the solution if there is now an opportunity to play a role in making sure it is finally closed.

Naturally, the United States has the primary responsibility to accept inmates – especially if apparently innocent people were mistreated and illegally held there for years. However, if this isn’t possible politically in the United States, then Europe must take responsibility for them. After all, several European countries, including Germany, allowed rendition flights with terrorist suspects to nations allowing torture from their territory.

The inmates in question aren’t dangerous Islamists, rather they are people that American officials couldn’t prove had done anything wrong after hundreds of often gruesome interrogations. Their only mistake was being at the wrong place at the wrong time. Some were even sold to the Americans by bounty hunters. Should they continue to suffer in Guantánamo simply because no country will accept them and they cannot return to their homelands?

Just as Interior Minister Schäuble and Foreign Minister Steinmeier have discussed, each individual name on the list needs to be checked. If a specific case raises concerns, the freed inmate could be watched or released only under certain conditions. But the German government should handle the US request in good faith.

After all, this is about people who have suffered severe human rights abuses over years. Germany is obliged to help end this regardless where it occurred. In this case, it’s possible to do this with a minimal effort. And Berlin can easily withstand Beijing’s protests if the United States wants to send members of China’s Uighur minority to Germany.

But deciding whether to accept former inmates absolutely cannot be allowed to become a campaign issue in the run-up to Germany’s general election in September. Such a question of fundamental human rights is a far too serious matter.