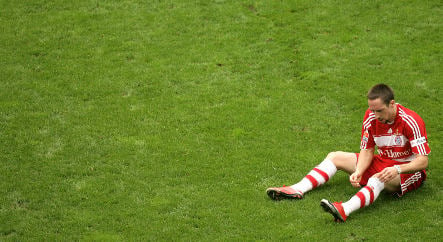 The deal, which could come close to being the most expensive transfer in football, is supposedly contingent on whether Man U’s Cristiano Ronaldo moves to Real Madrid this summer.

The paper said the 26-year-old Ribéry, who currently rakes in €8 million a year at Bayern, would also become the best paid player at Old Trafford.

Ribéry came to Munich in 2007 for €25 million from Marseille. Despite initially enjoying suiting up in lederhosen for the fans and enjoying unparalleled adulation in Munich, the French international has become disenchanted as the defending Bundesliga champions have struggled this season. He has made no secret that he would attempt to leave should Bayern fail to qualify for the Champions League.

Although Bayern have said they don’t want to sell their French star, the club has at the same time started to look around for a creative midfielder in case they can’t hold onto Ribéry. Werder Bremen’s Brazilian playmaker Diego is reportedly top of the list for Bayern’s management.