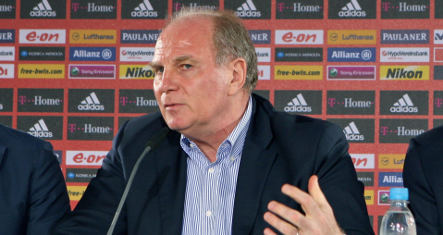 “When one looks at the current trend in Europe, it’s notable that many of the successful coaches are personalities with a huge amount of experience and of advancing age,” Rummenigge told the Welt am Sonntag paper.

Klinsmann was sacked last Monday as Bayern head coach after just ten months in charge, following a string of poor results with Jupp Heynckes appointed as caretaker coach for the rest of the season.

Dutch coaches Louis van Gaal, Frank Rijkaard and Martin Jol have all been mentioned in connection to the vacant job at the defending Bundesliga champions, as well as German Football Federation (DFB) director of football Matthias Sammer.

“The man we seek is an experienced coach with a personality which can allow the team to develop,” said Rummenigge.

But there is another clear message from Bayern to whoever gets the job: immediate success is both expected and demanded by the German giants.

In all of Europe, whether it is Real Madrid or Barca, in the big Italian or English teams, the clubs simply do not have enough time to allow a coach to install new ideas and then wait three or four years for titles,” said Rummenigge.

“We acted where we felt we needed to and it should not be forgotten that the same team we have now, won the Bundesliga by ten points last season, having led the table from day one and also took the German Cup,” he added.

And Rummenigge admitted he had underestimated the resentment towards Klinsmann which still festered amongst Bayern fans from his dropping of club stalwart Oliver Kahn as goalkeeper from the national side in 2006.

On his way to guiding Germany to third place at the last World Cup, Klinsmann opted for ex-Arsenal goalkeeper Jens Lehmann over Kahn and Bayern fans had not forgotten this when “Klinsi” started as Munich coach in July 2008.

“What we underestimated was the fact there was obviously still a group of supporters who still held a deep resentment on this issue,” added Rummenigge.

“It was hoped all the dissatisfaction would disappear after the World Cup, but unfortunately that was not the case.”