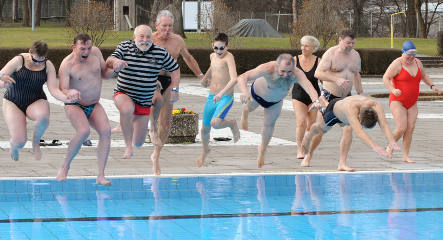 The German Lifesavers’ Society (DLRG) warned at the weekend that people were risking their lives by not learning to swim properly.

“Latest estimates suggest that up to 40 percent of boys and girls cannot really swim,” said DLRG president Klaus Wilkens in an interview.

He said five years ago the proportion of children who could not swim was around 30 percent.

The closure of local swimming pools had played a big part in the decline of those who can swim, he claimed, saying that 1,500 of the 8,300 swimming pools across Germany had closed down over the last decade.

This leaves around 20 percent of schoolchildren with no access to pools.

He said he could not understand why the economic stimulus package agreed by the government did not include plans for building new ones or even renovating those still open but in need of work.

The German Swimming Association (DSV) also complained that too many children were unable to swim. Andreas Felchle, vice president said, “Sports in schools in general, but particularly swimming, has collapsed terribly. This is a social scandal.”

And Rüdiger Steinmetz, president of the Association of Public Baths said, “Above all, in primary schools in socially difficult areas and with many foreign pupils, are only a few pupils fit for deep water. Many cannot swim but take it on anyhow.”

Last year 475 people drowned in Germany, an increase of 12 percent over the previous year. Well over 90 percent of the fatal swimming accidents in the country happen at unmonitored spots in rivers and lakes.