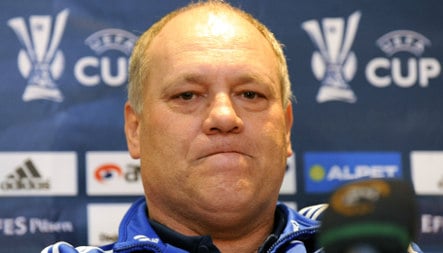 Goalkeeper Tim Wiese was Bremen’s hero in Hamburg when he broke home fans’ hearts with three consecutive saves in the penalty shoot-out to hand his side a 3-1 victory on spot kicks in the German Cup semi-final.

And with Hamburg fourth in the Bundesliga, while Bremen languish in 10th, Jol is not bothered by last week’s cup defeat at the hands of Bremen or the

2-0 upset at Dortmund in the league last Saturday.

“We have played well in two games against Werder so far this season,” said former Tottenham boss Jol. “We beat them in the Bundesliga and drew in the German Cup (the game

The fact that Hamburg lost on penalties does not concern Jol who is convinced his side can come through both the impending two-legged UEFA Cup matches.

“It is the end of April and we are still near the top of the Bundesliga table. “Bremen are in tenth place. Should things be the other way round, we would have a problem.”

Bremen are in the German Cup final on May 30 at Berlin’s Olympic Stadium where they will face Bayer Leverkusen, but their cup form has been one of the few things their fans have had to cheer about this season.

And until Hamburg lost the second leg of their quarter-final 2-1 at Manchester City to go through 4-3 on aggregate, Jol’s side had a fine record of five wins in six games, scoring 12 and conceding only three goals.

And both sides know plenty about each other: “We know them and they know us, so there’s nothing new there,” said Jol.

Hamburg are without top scorer Mladen Petric for the trip to Bremen, he had eight stitches removed from the gashed shin he received in last week’s defeat to Bremen, but the Weserstadion tie comes to early for the Croatian. He will be out for another ten days, but it is hoped he will be fit for the second leg at Hamburg’s HSH Nordbank Arena a week later.

Germany defender Marcell Jansen was also ruled out on Wednesday with a rib injury he picked up in last week’s Bremen game and will not travel with the team.

For Bremen, the only key injury concern is the fitness of captain Frank Baumann who has missed the 3-2 win over Bochum last weekend, but is expected to have shaken off a knock to be fit in time.