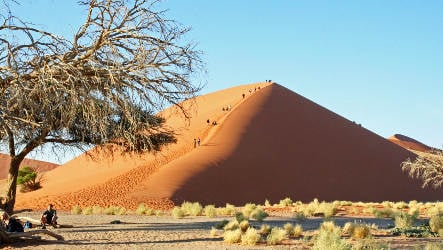 A Kudu antelope strolls into the bar – no, this isn’t the start to a lame joke, it’s merely a normal day on the Elisenheim guest farm in Namibia.

Elsewhere, a small springbok is playing with dogs and children. Korn schnapps, beer and burgers are going down well in the Bacchus Tavern between the desert dunes and the Atlantic coast. On the lonely savanna and desert tracks, the speed limit is 100 kmh. Gleaming snowy peaks turn out to be mountains of salt.

Namibia offers many surprises to visitors and, because of its past as the colony German Southwest Africa, it to this days still bears several Germanic hallmarks. That, along with reality TV programme “Our farm in Africa,” have sparked growing German interest in the rugged land wedged between South Africa and Angola.

The country has become a worthwhile destination for tourists looking for an African adventure without the stress and mass safaris of its neighbours. But it’s also a popular choice for immigrants from Germany looking to integrate with the local German community.

A van with noisy schoolkids on its loading platform leaves a cloud of dust in its wake. A group of baboons jump with lightening speed across the wide sand track and Uwe Schulze-Neuhoff does not have to brake. The engineer from North Rhine-Westphalia, who now owns a farm the size of Munich between the desert and the Naukluft massive, says calmly: “The apes are agile and intelligent. Nothing’s going to happen to them.”

Warthogs, Oryx, Kudu and other antelopes are more likely to run into the car, he says, which is why he warns tourists to drive very carefully, especially at night. But Neuhoff is an especially accomplished track and desert driver, who counts employees of the German Embassy in Windhoek, four hours away by car, among his driving pupils. They practise on difficult stretches on the giant ranch.

On the veranda at Ababis farm, dinner is served. More than a dozen holidaymakers from Germany, Switzerland and South Africa are sitting at the long table. Host Uwe and his wife Kathrin, both from the Dortmund area, join them.

Hulda, the cook from the linguistically gifted Nama people, has prepared pumpkin soup, Königsberger meatballs of Kudu and figs. Her German is excellent. “I enjoyed learning it, just like that, it wasn’t difficult,” she says and smiles.

Outside, white, black and mixed-race children are playing. At the moment they are scrambling – they all want to suckle the little springbok Susi from the milk bottle with the dummy attached.

“Always do it slowly,” says the farmer’s wife before telling the story of the cute little animal, which has even made friends with the two sturdy house dogs. “We found Susi exhausted by one of our fences.”

Many Germans have made Namibia their new home in recent years. They are following in the footsteps of their fellow countrymen, who a century ago and more settled in the region when it was still a colony of the Kaiser. The territory later came under the administration of neighbouring South Africa until Namibia became independent in 1990.

Holidaying on a ranch for tourists or a hunting farm in the country is becoming more and more popular. The mix of relaxation, solitude without hardship and adventure outside of national parks and luxury camps has special appeal. Almost all livestock farmers in Namibia have now discovered tourism as a second source of income. Guests laze by swimming pools between palms and flowering hibiscus. Activities include horse riding, hikes to caves, animal tracking, meeting local peoples and desert safaris.

“Namibia is ideal for travelers new to Africa”, explains Ernst Sauber, a neighbour of the Schulze-Neuhoffs. “The country is stable and relatively safe. Roads, hotels and lodges are good by African standards, and the landscape and the wildlife are diverse and appealing.” The head of the neighbouring BüllsPort farm 40 kilometres away is a third-generation settler: his grandfather came from Schleswig-Holstein.

BüllsPort is one of the oldest farms in Namibia, and it is especially popular with walkers and riders. Namibia has enjoyed a tourism boom in recent years, but there is still plenty of room for more: the country is twice the size of Germany, but has only two million inhabitants.

Sauber is the main initiator of a small farmer’s group at Naukluft that promotes sustainable tourism and trains local people, for example as mountain and wildlife guides. At Nabasib, where the children go to school, solar panels were installed a few weeks ago, thanks to a fundraising effort by pupils at the Heinrich Hertz Schule in Hamburg. Using the solar panels, the school can now use the computers and photocopiers that were also donated.

It is approximately two hours by car from Ababis to the next tarmac road, and three hours in total to Swakopmund on the Atlantic coast. Some farmers bomb along at 130 kmh on the straight sections of the sand track; those who travel slowly can better observe Oryx, Kudu, Jackals and Great Bustards. Two striped spots can be seen on the mountainside: a look through binoculars reveals them as mountain zebras.

Despite the barren landscape, the fauna is lush in central Namibia – a long way from Estosha Park in the north, which is among the most species-rich reserves in Africa. Far and wide, there is no other vehicle in the sand, but a lonely road sign reminds that the speed limit is 100 kmh.

In the sunshine, gleaming desert dunes rise up several kilometers before the coast. Two spots on the golden slope reveal themselves as two men sand-surfing, one black and one white.

Near the coastal resort Walvis Bay, nature and humans have created something magnificent: hundreds of flamingos rummage with their bills in the mud and strut gracefully through the giant pools on the Atlantic coast. Snow-white mountains shimmer on the horizon. It is no illusion. Salt is heaped up here awaiting shipment.

Those who want to meet witnesses of German-African history and experience real German Gemütlichkeit for a couple of days are well catered for in nearby Swakopmund. The town currently has 40,000 inhabitants and was formerly an important port for immigrants from Germany and for the colonial administration.

The sea is raw; the wind whips up waves and spray. Clean streets and neat houses, many of them in the colonial style, characterise the town centre. The desert begins at the town’s edge.

Bratwurst, smoked port and sauerkraut are savoured by locals and tourists alike in the Swakopmund Butchery, run by German-Namibian couple Katja and Gero Düvel. The two master butchers speak Afrikaans, English and German with their customers. Katja, from Meerane in Saxony, met Gero in Bavaria.

Gero has German roots, grew up on his parents’ farm near Windhoek and has also worked in Düsseldorf. Their store is in a good neighbourhood in the historic centre of the town. Nearby are the Eagle Pharmacy, Ankerplatz Supermarket and the Town Hall, in smartly renovated buildings, as well as the German doctor Rüdiger Moisel’s practice.

In the nearby Swakopmund Brewhouse draught beer and herbal liqueurs are going down a treat. The Kudu and beef steaks are big and juicy. In the Bacchus Tavern, landlord Thomas Welte from Villingen and Dr. Moisel from Zittau, a doctor and a committed member of the Swakopmund male voice choir, are discussing why Germany is so hectic and stressful. Both are very proud of their new homeland. Namibia, with its moderate climate and absence of natural disasters, is one of the most politically stable countries in Africa. “Tourists turn to immigrants” the landlord says to a guest from Berlin, smiling.

Whoever wants to explore bars and pubs where the less well-off drink and palaver has to go to the slums on the outskirts of town, ideally with a guide like Raymond Inichab. The head of Hata Angu Cultural Tours strolls with guests of all races and nationalities through the suburb of Mondesa, visits nursery schools, a Nama medicine man, huts and little hauses of the Herero, Damara and Ovambo peoples and also a simple pub. The local council is responsible for public toilets, roads and schools.

But life in the poorer areas here is not as dire as in similar areas in many other African countries. The tourist visits are carefully organised, with the agreement of the inhabitants. Raymond says: “Whoever speaks up and says something about himself is welcome here, and can also film and take photographs without any trouble.”

It is a good three hours by car from here to Windhoek. Those who want to see even more of the nature here spend the night at the Elisenheim Guest Farm, with lodging house rooms and a campsite a little further away. A female Kudu earlier strutted through the main door into the rustic bar-restaurant, cautiously nudging a guest here and there at the shoulder.

“We raised the baby Kudu from the bottle,” explains foster-father Andreas Werner. When “Kambi” the Kudu had her own offspring, it became famous across Namibia just over a year ago.

Andreas Werner (50) and his wife Christina (47) were both born in Namibia. Andreas’ father came from Hamburg; Christina has Prussian-Bavarian roots. The couple have lived on the farm since 1983 and have expanded it for guests. The giant eucalyptus trees, which protrude through the restaurant roof, are eye-catching. Elisenheim visitors encounter Ibex, warthogs, baboons and usually Kudu antelopes on their walks and journeys across the farm.

The Raith family are living the highlife at Windhoek’s Hotel Heinitzburg, especially at the candle-lit dinner, where the dishes are served by waiters in white gloves. The complex, which looks like a small town castle, is situated on raised ground not far from the city centre. Construction of the “old stronghold” was begun by the Kaiser’s soldiers in 1890.

“Namibia has a future, and well-off visitors too,” says Beate Raith, from Kitzingen in Lower Franconia.

The 44-year-old has lived in Namibia for three decades and runs the Hotel Heinitzburg with her 25-year-old son Tibor. Her father-in-law Wolfgang Raith came to Africa 50 years ago – the butcher from the Säckingen area in the Black Forest has been a successful businessman in Windhoek for many years.

Seeing and being seen is important at Nice in Mozart Street, where the country’s elite sip prosecco and red wine or enjoy an oryx steak. The modern restaurant and bar also has a specalised school for fine cuisine, where young Namibians are trained.

“The country needs more of its own people in senior positions,” says Stephan Brückner, whose grandparents emigrated from Germany. The 43-year-old manager, who also studied in Berlin, points to the full bar and says: “More and more of the population has money. That’s very encouraging for the future of Namibia.”