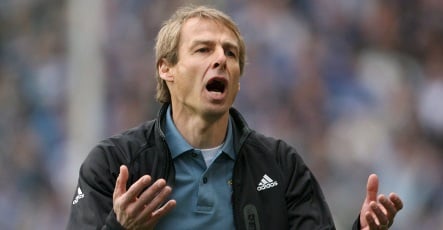 The 44-year-old has been rumoured to be on the chopping block for several weeks, despite having been with the team for just eight months. His contract had been set to run until 2010.

“Naturally I’m disappointed right now,” Klinsmann said in a statement. “But I’d still like to thank FC Bayern Munich, its fans, the coaching staff and the players for an eventful time from the bottom of my heart.”

Klinsmann’s replacement for the season’s final five games will be 63-year-old Jupp Heynckes, who already led the floundering powerhouse team from July 1987 to October 1991.

“This was a very difficult decision for us to make,” said Bayern chairman Karl-Heinz Rummenigge. “But the results from the past weeks, they way they came about, and, more than anything, the situation five match days before the end of the season forced us to act out of responsibility to the club.”

Bayern picked Klinsmann last year with high hopes following his successful stint as the coach of the German national team. Despite having what was considered an average collection of players, Klinsmann managed to take the side to the semi-finals of the 2006 World Cup in Germany.

But Klinsmann had never coached at the club level and the latest in a series of humiliating defeats for Bayern came this weekend with a 1-0 loss at home to Schalke, leaving the Bundesliga’s defending champions in third place.

“We’ve laid the groundwork for the future and I still believe the team can become champion this season,” Klinsmann said.

The beleaguered Klinsmann made headlines earlier this month when he attempted to sue daily newspaper Die Tageszeitung for printing a cover image of him being crucified for their Easter edition.

His lawyer said the coach felt his dignity had been violated by the cover, which read “Always Look On the Bright Side of Life” – a spoof on the Monty Python film “Life of Brian.”