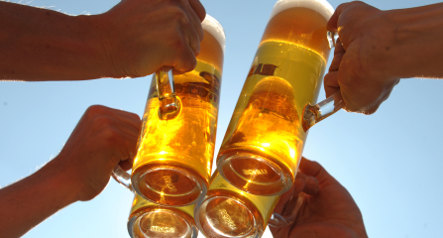 German Beer Day was started in 1994 to pay tribute to the founding of the country’s famed purity law, or Reinheitsgebot, in 1516, which decreed that beer could include only water, malt and hops. Only centuries later did brewers discover yeast was also required to ferment their amber nectar.

German Agriculture Minister Ilse Aigner acted as “beer ambassador” in Berlin on Thursday, celebrating the hoppy occasion with the German Brewers Federation (DBB) and the DIRB beer purity institute by honouring the industry’s most engaged players.

While the DBB reports that Germany has the world’s most diverse beer market, a shrinking number of large brewers threatens this variety, Brauen.de said on Thursday.

“The beer variety shrank significantly in recent years, which also has to do the great market power of some large breweries,” the company said.

In the 18th and 19th centuries, high-calorie beer was considered a diet staple in Germany. But now large breweries filter beer to increase shelf life, decreasing its nutritional value.

“It’s no wonder that the trend is turning back to beer brewing like the mothers of old,” the company said, adding that home brewing could save Germany’s manifold beer tradition.

“More households in Germany are brewing their beer themselves,” home brewing supplier Dirk Oschmann said. “What often begins as a gag or a gift turns into a serious hobby combined with a multifaceted taste experience.”