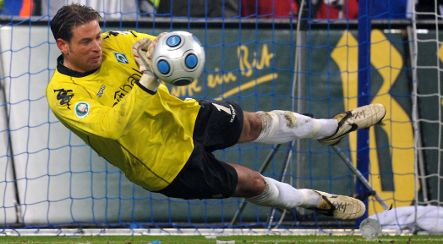 Goals by Bremen’s Germany defender Per Mertesacker and Hamburg’s Bayern Munich-bound striker Ivan Olic had meant it was 1-1 at the end of 90 minutes, but home side Hamburg had captain David Jarolim sent off deep in injury time.

Both sides had their chances to win the game in extra-time, but Bremen goalkeeper Wiese was their hero of the hour with a brave save in the 120th minute before making the three crucial saves in the shootout.

“That was one of the best nights of my career,” said Wiese whose team will now face Bayer Leverkusen in the final at Berlin’s Olympic Stadium on May 30. “We came here as underdogs and put in a great performance, you can’t ask for more.”

This was the first of four meetings between the two sides who will meet each other twice in the UEFA Cup semi-finals over the next fortnight and then again in the Bundesliga on May 10.

“We played very well and defended well despite being outnumbered in extra time,” said Hamburg’s Germany winger Piotr Trochowski. “Unfortunately, we were not rewarded for our hard work in the penalty shoot-out.”

Bremen took the lead in the north Germany derby when Brazilian play-maker Diego curled a free-kick over Hamburg’s wall forcing goalkeeper Frank Rost to parry the shot, with Bremen’s Mertesacker on hand to tap the rebound home on 11 minutes.

It was 1-0 at half-time, but Hamburg equalised after Olic fired a drive at Wiese. The shot was blocked only for the rebound to fly out to Hamburg midfielder Guy Demel.

He drove his shot back and Olic – more by luck than judgement – stuck out his leg and the ball flew into the net on 67 minutes.

The home side were reduced to 10 men in the 92nd minute when Jarolim tackled Mesut Özil who was through on goal and, amidst huge protests from the Bremen bench, the Hamburg captain was shown a straight red.

Despite their disadvantage, Hamburg went closest to a winner in the second period of extra time when Trochowski fired just wide.

In the 120th minute, Wiese threw himself at the feet of Hamburg subsitute Jonathan Pitroipa, who was through on goal, and only the goalkeeper’s bravery kept Bremen in the game.

In the shoot-out, Hamburg’s Joris Mathijsen and Bremen’s Claudia Pizarro both scored their penalties before Hamburg’s Jerome Boateng had his effort saved while Oezil made no such mistake to put Bremen 2-1 ahead.

Wiese then went guessed right to dive as he saved Olic’s effort before captain Torsten Frings put his side 3-1 up. Hamburg went out of the cup when Germany defender Marcell Jansen also saw his effort saved.

In the Berlin final, Bremen will now face Bayer Leverkusen who also needed extra time to beat second-division side Mainz 4-1 on Tuesday.

Leverkusen conceeded a late equaliser from second division Mainz, but then hit back with three goals in extra time.