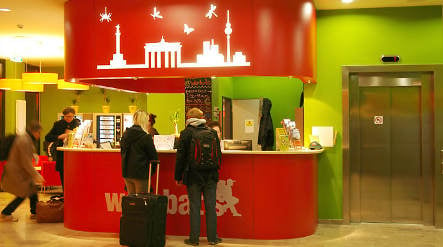 Four years ago architect Pierre Ammon and geographer Jörg Schöpfel said goodbye to their day jobs and teamed up to realise a long-time dream: opening their own hostel.

Within months, the two had founded EastSeven, situated just north of Berlin’s über-hip Mitte district. Despite what appeared to be a saturated budget travel market at the time, their project quickly became one of many modern hostels sprouting up in the centre of the German capital.

“Berlin is booming,” says Ammon. “The secret is you can survive here quite cheaply.”

But EastSeven and its contemporaries are certainly not your father’s Jugendherberge – even if Germany was the birthplace for the youth hostel movement back in 1909.

After the teacher Richard Schirrmann first came up with the idea of offering a safe and affordable place for young travellers to stay in the town of Altena in North Rhine-Westphalia, the dorm-style youth hostel concept spread like wildfire around the globe.

Of course, many modern hostels in Berlin and elsewhere in Germany have long since ditched rickety bunk beds to morph into slick budget hotels often catering to Europe’s EasyJet set rather than your typical backpacker crowd.

And with 62 hostels competing for customers in Berlin alone, it’s perhaps no surprise that four of Germany’s top-five rated hostels on booking website Hostelworld.com call the capital home – and three of them are even located within a few blocks of one another in Mitte.

“I think this is the reason why the top five [hostels] are all in Berlin. The more votes you get the better rating you’ll have – if you do a good job, of course.”

The Wombat’s chain, including two other locations in Munich and Vienna, won the HOSCAR for Best Hostel Chain of 2008. Beineke cites the rise of low-cost airlines as one explanation for the recent explosion in budget tourism.

But with hundreds of hostels and budget hotels on offer, Berlin leads Europe in this kind of tourism, according to Christian Tänzler of Berlin Tourismus Marketing GmbH, which runs the city’s official tourism website VisitBerlin.de.

Hostel managers themselves attest to a sort of demographic shift in the budget travellers filtering through their locales.

Roughly one third of Berlin’s tourists are under the age of 30, according to Tänzler. Boasting unique music, art and clubbing scenes, the capital city draws a decidedly young and distinct brand of budget traveller. Tänzler says this combined with the city’s unmatched cost-benefit ratio in Europe gives it a pronounced advantage.

But Tänzler says the number of youthful visitors to the city also contributes to its long-term tourism sustainability, since the target market grows with the times.

“People who may have backpacked through the city as young adults are that much more likely to return, sometimes with families, sometimes a decade later,” he explains.

And that’s where the modern hostel concept shines with plenty of private rooms and stylish design all at an affordable price.

Schöpfel and Ammon apparently have given customers a lot of what they liked at EastSeven: Hostelworld.com users have repeatedly voted EastSeven among the top contenders in the world for Friendliness, Cleanliness and Location – not to mention Best Hostel in Germany for 2008.

“My mother shouted at me: ‘I don’t believe it. Cleanest hostel? No way!’” recalls Schöpfel.

Those responsible for Germany’s top-ranked hostels, however, still insist that one should never underestimate the importance of good, old-fashioned hospitality.

“We try to win our customers at the reception,” says Jim Hadfield of the nearby Circus Hostel, which won second place for Best Hostel in Germany at the 2008 HOSCARS.

“We have very good staff that really enjoy their job,” he continued. “People who work here get praised often. 99% of the time customers are having a good time, and that gets back to the staff.”

Would Richard Schirrmann still consider such a place a hostel? A century later there’s no way to know, but the mastermind behind the Jugendherberge would certainly have no quibble with quality accommodation easy on the wallet.