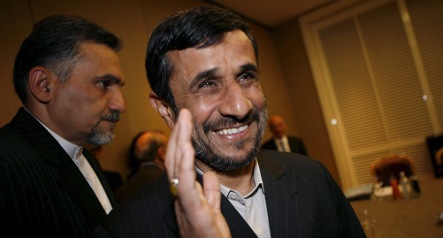 EU states were split Sunday on whether to follow a US boycott of a controversial UN conference on racism in Geneva, where Iran’s president is expected to launch a verbal onslaught on Israel.

“Despite intensive prior efforts, particularly on the part of the European Union, there remains the fear that this conference will be hijacked for other interests, as was the case with the previous one in 2001,” said Frank-Walter Steinmeier in a statement Sunday. “And that is something we cannot accept.”

Germany would be “a very attentive observer” when the conference got underway, said Steinmeier, and he did not rule out “returning to active participation a little later.”

The decision, which had not been an easy one, had been taken following telephone discussions with his fellow EU foreign ministers late Sunday, Steinmeier said.

The country was the latest to announce it would not be attending the five-day Durban Review Conference, joining Australia, Canada, Israel, Italy, the Netherlands and the United States.

France, on the other hand, will attend, said a source close to President Nicolas Sarkozy’s office.

Iranian President Mahmoud Ahmadinejad arrived in Geneva Sunday, one of the few heads of state attending. Ahmadinejad, who has called for Israel to be “wiped off the map” and questioned the Holocaust as a “myth,” is to address the gathering at around 3:00 pm Monday (1300 GMT).

Earlier Sunday Ahmadinejad – who is seeking re-election in June – was quoted by Iran’s state broadcaster as saying “the Zionist ideology and regime are the flag bearers of racism.”

The Geneva meeting is meant to take stock of progress in fighting racial discrimination, xenophobia and intolerance since the controversial World Conference Against Racism in Durban, South Africa, eight years ago.

But Levy said: “Officially it is aimed at denouncing racism, but it has invited a Holocaust denier who has called for the destruction of Israel.”

Australian Foreign Minister Stephen Smith said they could not be sure the conference would be used “as a platform to air offensive views, including anti-Semitic views.”

US President Barack Obama said anti-Israeli language that was “oftentimes completely hypocritical and counterproductive” in the draft final communiqué had been the red line for his administration.

European Union governments were divided over whether or not to attend.

Belgium called for countries to attend after the Netherlands vowed to stay away because it feared the event would be abused “for political ends and attacks on the West.”

Britain, while expressing reservations, said it still intended to attend.

And a source close to Sarkozy’s office told AFP late Sunday: “France will go to Geneva… in order to articulate its standpoint on human rights issues.”

But Italy confirmed its withdrawal Sunday.

The Paris-based European Jewish Congress kept up the pressure, calling on all EU states to boycott the event. Ahmadinejad’s presence meant the United Nations had “put the fox in charge of the hen house,” said EJC president Moshe Kantor.

Switzerland has been representing US consular interests in Iran since Tehran and Washington broke off diplomatic relations in 1980.

Saberi was sentenced by an Iranian revolutionary court to eight years in jail on charges of spying for the United States during a closed-door trial, in a verdict unveiled Saturday.

The meeting took place despite Israel’s attempts to talk Merz out of it.

Monday, as well as being the anniversary of Adolf Hitler’s birth, also marks the start of Holocaust commemoration events, including a ceremony in Geneva attended by leading Jewish figures including Nobel peace laureate Elie Wiesel.

The UN High Commissioner for Human Rights, Navi Pillay, said she was “shocked and deeply disappointed” by Washington’s decision to stay away. Campaigners Human Rights Watch said the boycotting states were “turning their backs” on victims of racism.