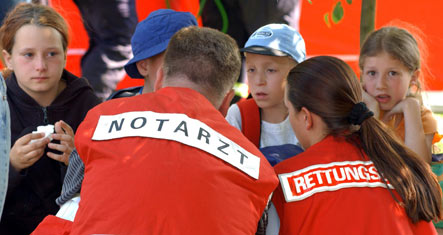 Detlef Blumenberg said people with a medical crisis in Germany have three options: they can call out their own doctor, paramedics without a doctor, or an ambulance with an emergency doctor.

Five years ago patients waited an average of 8.7 minutes for such help in an emergency, but this has risen to 11 minutes. In the slowest five percent of cases back then it took emergency doctors 18 minutes to arrive. It now takes them more than 27 minutes.

Blumenberg admitted that the trend was cause for concern. The reasons for the time increase include a lack of emergency doctors in the countryside, coordination problems in the emergency services’ control centres and that emergency doctors are called out to cases that paramedics or normal doctors could deal with.

Because the on-call care provided by regular physicians has been cut back, people are calling the emergency services even for minor illnesses such as fever, said Blumenberg. In each German state between five and ten percent of emergency calls do not actually require an emergency doctor. In some states this included as many as fifteen percent of cases.

The association head suggested that all calls should be directed to the 112 emergency number, whether emergency cases or call-outs for normal doctors. It is essential to have sufficient qualified operators in the control centres, so that they can assess the calls and decide what kind of help to send. Blumenberg added that emergency doctors were sent too readily, because operators feared making the wrong decision.

He added that the circumstances in which cases were dealt with had changed. Emergency doctors had to cope more and more with marital conflicts or alcoholism while attending to patients, or had to treat seriously ill patients who were cared for at home.