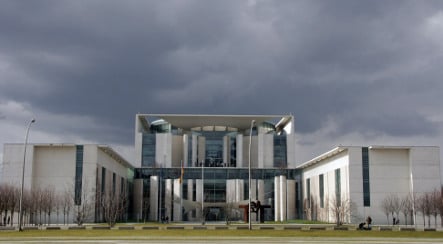 Dark clouds gather over the Chancellory in Berlin. Photo: DPA

The paper said around 40 German business and union representatives will come together with Chancellor Angela Merkel and Foreign Minister Frank-Walter Steinmeier on April 22 to discuss how to get Europe’s largest economy back on track. But government sources told the newspaper there are currently no plans for a third German stimulus package.

The government is reportedly concerned the economy could shrink more than four percent and unemployment will surge to more than four million this year despite Berlin’s efforts to soften the impact of the global downturn.

Süddeutsche said the summit is intended to improve Germany’s response to the economic crisis by improving coordination between the government and the business community and trade unions.

Frank Bsirske, the head of service sector union Verdi, demanded over the holiday weekend a further €100 million in government spending to help spark economic growth. But Berlin officials are reportedly keen to point out at next week’s summit that funds from two previous stimulus packages are only now going into effect.