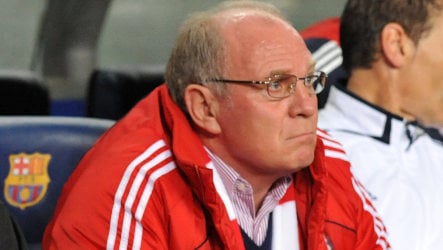 The reactions of Bayern Munich’s living legends to the defeat in the 1st leg of their Champions League quarter-final, where the team were comprehensively outplayed by Barcelona’s all-star lineup, covered a Wagnerian emotional spectrum that included rage, horror, shame, abject despair and simple tears, media reports said.

“I saw our old friend Udo Lattek at half time. He was crying,” said club chairman Karl-Heinz Rummenigge in news magazine Der Spiegel, “I don’t know if they were tears of anger or tears of mourning.”

Lattek, manager of Bayern’s mythical 70’s team, which included Bayern godhead Franz Beckenbauer, Gerd Müller, and Sepp Maier won the European Cup with Bayern in 1974, when West Germany also won the World Cup. To hear the veterans of those days speak last night, those glories seemed to be ashes.

Rummenigge shared an insight into the Bayern dressing room with Yahoo’s sports website: “No-one spoke. No-one understood what they had just experienced. We will have to sleep on it for a night – if anyone can sleep.”

Beckenbauer, Bayern’s Kaiser, was almost speechless with anger: “A catastrophe! The first half was the worst that I have ever seen from Bayern. Lell gets the ball through his legs and Messi can just finish it off. That’s school-boy stuff. I don’t know what to say. 4:0 was a merciful result.”

Despite previous assurance that there would be no shame in losing to what is regarded as the world’s best team, the scale and abjectness of the loss to Barcelona has once again put team coach Jürgen Klinsmann’s job under pressure. Neither Rummenigge or Beckenbauer would offer a comment on Klinsmann’s new status.

“What are we meant to do, declare the death penalty?” fumed Beckenbauer. “There’s been enough talk, only the team doesn’t seem to understand.”

“I’m not going to comment on Jürgen Klinsmann after every game,” Rummenigge said. “We’ve got a game in Frankfurt on Saturday, even if that sounds strange.”