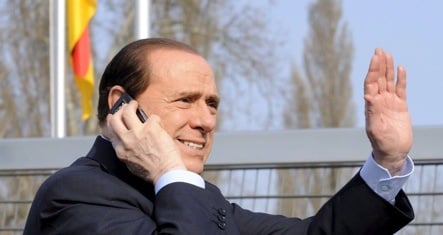 Arriving on the German side of the river, Berlusconi got out of his limousine talking on his mobile phone and instead of greeting Merkel wandered off to the river bank still talking.

The two were reportedly discussing the choice of the next NATO secretary general, a thorny issue that may not be resolved at the Saturday summit after Erdogan threatened to veto the prime candidate.

Left standing alone on the red carpet, Merkel smiled weakly at the Italian and proceeded to greet half a dozen other leaders including British Prime Minister Gordon Brown as they arrived in their motorcades.

Once the leaders were all assembled seven or eight minutes later, Merkel gave up on Berlusconi and went to join the other leaders inside, peeking out at one point to see if the Italian was coming in – but in vain.

His phone call continued, and when a brass band struck up, Berlusconi put his finger in his ear and walked further down the river bank to escape the noise.

The leaders, including US President Barack Obama, then crossed the bridge to meet President Nicolas Sarkozy who crossed from the French side before meeting midway and posing for a photo without Berlusconi.

Meeting on the bridge between old foes France and Germany was of symbolic significance as NATO leaders began the final day of a summit marking the military alliance’s 60th anniversary.

According to Danish press reports, Prime Minister Anders Fogh Rasmussen has privately announced his candidacy to take over the top civilian post at NATO from Dutch diplomat Jaap de Hoop Scheffer, whose term ends on July 31.

Erdogan is angered by Rasmussen’s failure to ban a Denmark-based TV station linked to Kurdish rebels and by his stance in 2005 during the crisis over Danish cartoons mocking the Prophet Mohammed.