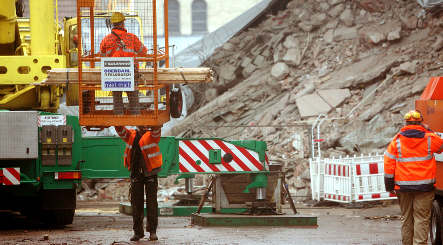 Workers clean up at the collapse site. Photo: DPA

Experts believe the collapse was caused by problems at the underground construction site near the archive. Recently, media reports revealed that construction managers and city officials saw measurements that clearly showed the archive was sinking weeks before the building collapsed into a nearby underground metro construction site on March 3, killing two young men and destroying precious historical documents. The city has since opened an investigation into what caused the accident.

Feld confirmed that among the buildings searched were the central offices of Cologne’s Transit Authority (KVB), as well as those of building and engineering firms. He did not to give details of the search for fear of compromising the ongoing investigation.

Meanwhile, the KVB supervisory board met on Tuesday morning to discuss personnel-related issues associated with the collapse. Their main focus was technical executive Walter Reinarz, who has come under fire for not disclosing important information about groundwater problems at the subway construction site near the archive.