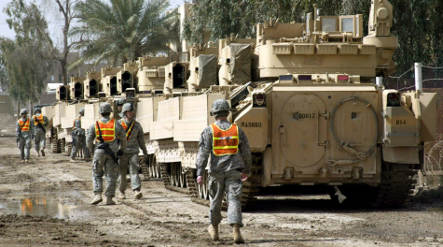 A file photo of US troops in Iraq. Photo: DPA

He was one of seven soldiers implicated in the case, and one of three non-commissioned officers to be tried for murder.

Master Sergeant John E. Hatley has also been accused of participating in the executions of four Iraqi prisoners in March or April 2007 and is to stand trial at barracks near this small town on April 13, an army statement said last week.

Co-defendant Sergeant Michael P. Leahy, an army medic, has pleaded guilty and was sentenced in February to life in prison with the possibility of parole.

All the soldiers were with the 1st Battalion, 18th Infantry Regiment, 2nd Brigade of the 1st Infantry Division in Iraq, which is now part of the 172nd Infantry Brigade based in Germany.

Two other soldiers have pleaded guilty to lesser charges and been sentenced to prison terms of less than a year, US media reports said, while the army has dropped criminal charges against two other sergeants, a spokeswoman told AFP.

According to media reports, Hatley, Mayo and Leahy allegedly killed four Iraqi prisoners with pistol shots to the head and pushed their bodies into a Baghdad canal after attacks on a US patrol killed two soldiers.

US military law forbids harming enemy combatants once they are disarmed and in custody.

The New York Times quoted statements and court documents in which Mayo and Leahy each told of killing at least one of the Iraqi detainees on instructions from Hatley.

The paper said it had obtained the documents from someone close to a soldier in the unit who insisted on anonymity and who had an interest in the outcome of the legal proceedings.

According to those documents, the US soldiers detained the Iraqis following a firefight and seized automatic weapons, grenades, and a sniper rifle, but were told by superiors to release the men for lack of sufficient evidence.