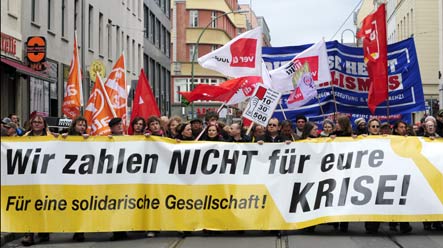 Approximately 15,000 people marched through central Berlin under banners reading “We Won’t Pay For Your Crisis,” while Frankfurt saw crowds of up to 12,000 gather in the streets. Despite the mood of solidarity, head of the left-wing party Die Linke Oskar Lafontaine was pelted with eggs during his speech to the crowds.

The demonstrations were organised by a broad association of left-wing groups, trade unions, environmental groups, and anti-globalisation activists. Some fights erupted after the mainly peaceful demonstration in Berlin, and a police spokesman said that 25 people had been arrested on suspicion of rioting or property damage, among other offences.

According to the police, individual demonstrators had thrown bottles and stones at the police, and fireworks had been set off, slightly injuring 12 officers.

The demonstrators chanted anti-capitalist slogans, and also vented their anger at the Hartz-IV unemployment benefit reforms, which continue to draw fire four years after their introduction in 2005.

In a separate speech made in the Bundestag, parliamentary group chairman of Die Linke Gregor Gysi said the denial of the popular car-scrapping premium to people living on Hartz-IV was a “scandal” and that the political establishment should no longer tolerate the “casino mentality” of the financial markets.

Former GDR civil rights activist Friedrich Schorlemmer was among the demonstrators, and said that he hoped the demonstration would have “an input on society.”

“We need a reform of the whole system, and not just some repair work,” he said.