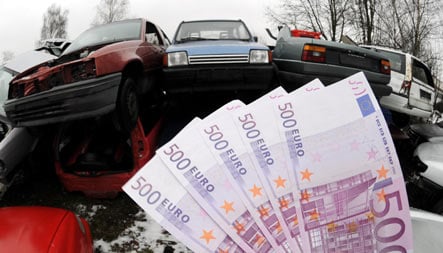 In an interview published in Sunday’s Bild am Sonntag newspaper, the CDU politician Michael Fuchs opposed the extension of the Abwrackprämie for junked cars, a proposal agreed to this week by German Chancellor and CDU leader Angela Merkel and Frank-Walter Steinmeier, chancellor-candidate of the centre-left Social Democrat party.

Fuchs said that taxpayers should not be expected to shell out more than the €1.5 billion originally earmarked for the car scheme, and called instead for other tactics to combat the financial crisis, including the reduction in state bureaucracy and scrap deals for other goods like office furniture and coffee machines.

“Other industries are justifiably asking why their products are not being subsidised in the same way,” he argued.

Despite the large demand for the scrapping bonus, which statistics suggest has artificially stimulated the automobile market, Fuchs said it has had no effect on the endemic problems the auto industry created for itself, namely over-capacity and models not suited to the market.

The programme, also called the “environmental bonus,” offers Germans €2,500 to junk an old car and buy a new one. Worth €1.5 billion, it was included in the country’s second stimulus package passed earlier this year.

The car-scrapping premium is valid until the end of the year, with enough funding for 600,000 premiums. According to the Federal Office of Economics and Export Control, 379,000 premium applications have already been submitted. Merkel and Steinmeier have agreed to top up the fund if necessary.