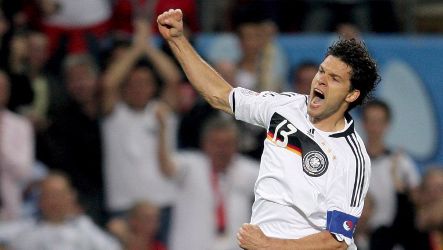 This must be what domination looks like. Photo: DPA

Losses to Norway in February and England last November have dented the team’s confidence and the national team needs a convincing win over tiny Liechtenstein – 151st in FIFA’s world rankings.

The principality is just 160 square kilometres and the national team is largely made up of part-time footballers.

Germany top Group 4 by four points from rivals Russia and need three points from Leipzig’s Zentralstadion, as well as next Wednesday against Wales in Cardiff, to stay on top with October’s trip to Moscow in mind.

But Ballack says Germany must start asserting themselves against opponents with an eye on the World Cup in June next year – starting with Liechtenstein.

“We are lacking in dominance,” said Chelsea midfielder Ballack, who captained Germany to their 1-0 defeat by Norway in February. “And recently results have also not been good, that is something we have to change. This has a lot to do with physical condition, but also with quality. We are in a phase where we don’t put teams under enough pressure.”

Ballack believes Germany will qualify for South Africa, but says the team needs to use games like these to make sure they can step up to the challenges they will face from the world’s top teams in the republic.

“We will qualify for the World Cup and we will go past the group stage even if it gets tight. But then come the matches against the big teams. We must now set the foundations so that at the World Cup we can win the so-called life or death matches. This is what I am trying to point out as the captain.”

And Liechtenstein should present no problem to Germany who have won all three of their previous meetings, scored 23 goals compared to their opponents’ three.

With Bayern Munich veteran striker Miroslav Klose out with an ankle injury, Stuttgart’s Mario Gomez will partner with Bayern’s Lukas Podolski up front with a flurry of goals expected from the home side.

At the other end, goalkeeper Rene Alder is out with an elbow injury and Hannover’s Robert Enke will take his place in the Germany goal for the first time since damaging his hand last autumn.

Enke, 31, could certainly do with keeping a blank sheet as his club Hannover are sliding down the Bundesliga table.

A broken hand kept him out from October until the Bundesliga’s late January restart after the winter break and he has conceded 31 goals in 15 league games – 11 in seven matches before he broke his hand and 20 in the eight since his return.

But with Liechtenstein yet to score a goal after three qualifying games and having conceded eight – their single point so far came from a 0-0 draw with Azerbaijan in Baku last year – Germany should have few problems.

And as Ballack said ominously in light of their defeats to Norway and England, Germany “simply have to play better and put in a better performance. And it will happen.”