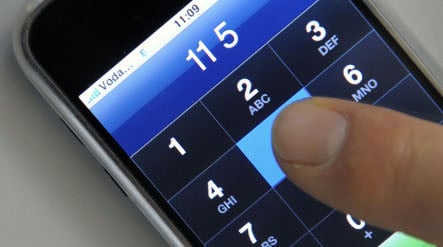 The Local’s offices are in Berlin, one of the five areas serviced by the Interior Ministry’s new pilot programme starting this week. Hamburg, parts of North Rhine-Westphalia and Hesse, and Oldenburg in Lower Saxony can also get a bureaucratic helping hand.

Thus, our mid-morning call was immediately directed to Berlin’s “D115” office, where we were soothed by mildly hypnotic music and the phrase “we love questions” at short intervals. Six minutes on hold was long enough for us to contemplate whether trippy music could in fact be a tactic employed to comfort those accustomed to blindly roaming the halls of Germany’s Kafkaesque government offices.

An operator finally interrupted our €0.07 cent-per-minute reverie, and did indeed seem to love questions – a refreshing novelty in a country notorious for surly civil servants.

Our question: How does one get out of paying Kirchensteuer, or church taxes?

The D115 operator first transferred us to another person who told us that one must go to the Amtsgericht, or county court, for the proper city district, then promptly gave the correct court office telephone number before connecting the line.

This is essentially all the hotline does. Operators don’t themselves answer questions, they simply put callers in contact with the appropriate authority who can.

In our case, the county court promptly answered the phone, confirmed we were within their jurisdiction, outlined the procedure, and gave us their operating hours. Mission accomplished in just under 10 minutes – and with the human assurance so desperately lacking on the often confusing government websites.

But callers can’t be sure that the office D115 connects them to will be answering the line – a problem that Berlin daily Der Tagesspeigel had four out of 10 times during test calls on Tuesday.

“They will also offer to get back in touch via phone or email within 24 hours in cases where questions can’t be answered immediately,” she said.

The hotline began on Tuesday for the some 10 million Germans within the pilot areas, but so far there are no provisions to help non-native German speakers with their questions.

“This programme was created quickly and in the future we will probably have operators proficient in foreign languages based on the needs of a region as it expands,” Peetsch said. “Like Turkish and English in Berlin, and French in Saarland, for example.”

The scheme, which the Interior Ministry plans to expand to the entire country over a two-year trial period, is the government’s attempt to innovate unpopular and inconvenient bureaucracy.

“We are a federal system and between the states and 20,000 different government offices, it’s often not clear which office is responsible for certain tasks,” Peetsch told The Local. “Sometimes you need to have studied law to figure it out. And that’s what we’re here for.”