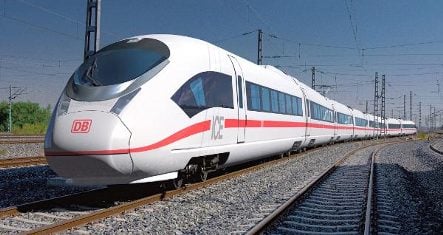 Siemens “has secured five of the last six contracts on the high speed rail market over 300 kmh (188 mph)” in China, the Munich-based conglomerate said in a statement.

The trains would be assembled in China from parts made in German, Austrian and Chinese factories run by Siemens, and were expected to be operational starting in late 2010.

Siemens executive Hans-Jörg Grundmann said the order was especially important because it meant supplying the first trains for a line from Beijing to Shanghai. That was “the most important high speed line in the country,” he said.

China plans to create the largest high-speed network in the world, Siemens added, and future connections between Wuhan and Guangzhou, and Wuhan and Shijazhuang would also use Siemens’ Valero trains.

“Altogether, the network of these lines will cover a total distance of approximately 16,000 kilometres (10,000 miles) by the year 2020,” the statement said.

The Chinese trains are to comprise 16 cars and carry around 1,060 passengers each. At a total length of 400 meters (yards), the new model “will be the world’s longest single train in use in the area of high speed transportation,” Siemens said.

Trains based on the Valero design already operate in Germany and between Madrid and Barcelona in Spain.

Moscow and Saint Petersburg are to be connected with a Russian version at the end of this year.