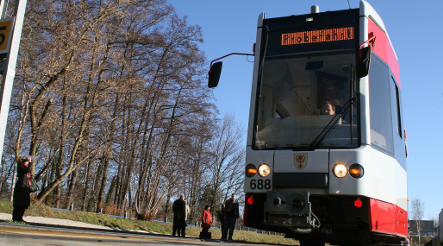 Would you like to see my train? Photo: DPA

The 31-year-old was convicted on Tuesday of disseminating pornographic materials after his risqué camerawork ended up on the mobile phone of a 20-year-old woman riding in his tram.

She recognised the pattern on the tram seat and floor and alerted the authorities.

The train driver admitted he’d snapped pics of his morning glory, but claimed they were meant for his girlfriend. “At the final station Forchheim there was nobody around,” he told the court.

He blamed technical issues with his mobile phone for transmitting the photos via the wireless standard Bluetooth, however, the court discounted his explanation.

“What on Earth were you thinking?” the judge asked him before imposing the fine.

The tram driver had successfully contested his dismissal by the Karlsruhe transit authority, but was transferred to a maintenance job. Should his conviction stand the shutterbug will once again face the chop.

“This is something we really can’t expect our passengers to tolerate,” said transit director Walter Casazza.