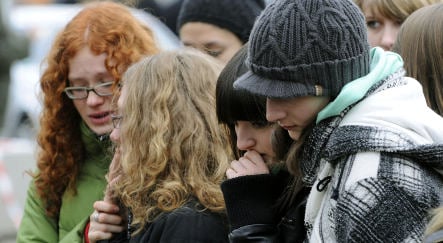 What causes such an outbreak of violence in a young person?

It is a mix of anger, a sense of inferiority, depression and the desire to become immortal. By doing something like this, a person creates the chance to “be someone,” to join the ranks of dreaded and dangerous people and to become worth something – even if it is the last thing they ever do. On top of this comes the bandwagon effect, the teenagers identify with other gunmen. We have this awful danger of contagion and an act like this increases the risk of others copying it.

So is Germany particularly at risk?

That is definitely the case. We have the most cases here, second only to the USA. And the killing spree in Erfurt certainly plays its part as an example as well. There is a spike of these cases in April and May for example, because that’s when the massacres took place in Erfurt and at Columbine high school. Due to the media coverage, these actions serve as a model.

Is it possible that the gun rampage in Alabama on Tuesday sparked the one in Germany?

That is definitely possible – that the culprit was sort of on hold and it induced him to take the last step. But it doesn’t have any causal qualities; acts like these are planned and prepared in great detail for weeks and months. It is a myth that people suddenly go ballistic and run amok, whether adults or teenagers.

Is there a typical criminal profile for an act like this?

No, it is a big mistake to look for a profile. This way you label a lot of people. If you would say a potential culprit are loners, male and like to play video games, for example, you probably put ten percent of the students in Germany under suspicion. We only know the development of behaviour which leads to the act – the warning signals are always very clear. If we recognise these signals early and intervene, it is possible that the teenager can be stabilised.

Is it possible to prevent these attacks?

There is great potential there – all such case in Germany could probably have been prevented. One has to be sensitive, particularly on site, establish trained crisis teams in every school which can recognize the patterns and warning signals. In our study we found 32 warning signals and expressions of suicidal thoughts, as well as identification with others who had run amok. Teenagers tend to reveal their plans a lot more than adults, and in the end very often announce their intentions. It is better to look closely once too often than not often enough. The schools have hidden their heads in the sand for too long, but fortunately, that is slowly changing.