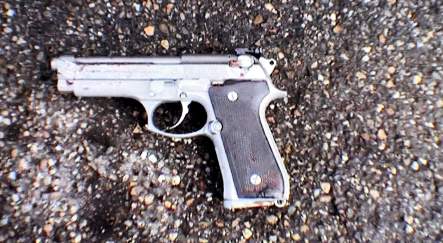 A police photo of the 9mm pistol used by Kretschmer. Photo: DPA

Kretschmer lived at his family’s home in nearby Leutenbach with his sister, three years his junior, mother and father, who is a well-off businessman.

Bild newspaper quoted a 19-year-old acquaintence on Thursday as saying: “My parents know his parents. They asked me to play with him because he had no friends. Tim had at least 30 soft air weapons on the wall in his room.

“His father had built a shooting gallery for him in the cellar. When we were out he had shot at us with the soft air pistols and wouldn’t stop. That really hurt. That’s why we all lost patience with his game.”

He added, “His father is in the gun club. Tim wanted his father’s Beretta more than anything.” That was the gun which Kretschmer stole on Wednesday morning and took to his former school and used to kill 15 people.

Another student, named as Mario H., told the radio station Antenne 1: “He was simply not accepted by anyone, but sat at home in front of his computer the whole time.”

He described Kretschmer as a reserved, quiet kind of person, who would not be the first person to come to mind in connection with such a massacre. “I would have thought of other former students before thinking of him,” he said.

Mario H. also spoke of Kretschmer’s collection of air guns, which he said the killer had had since he was 11 or 12 years old. “Sometimes he and others from school or the area shot at each other with them in the playground,” he said.

Bild also quoted an unnamed neighbour alleging Kretschmer had issues at his old school: “Sometimes I would meet Tim in the park. He continually complained about a teacher. She was picking on him all the time and threatened that if he continued the way he was, he would end up in the trash. He really hated her, like women in general.”

That would fit with the theory that at least part of his motive could have been a hatred of women – all but one of the victims he sought out at the school were girls and women teachers.

Apparently the 17-year-old had even written a farewell letter to his parents a few weeks ago. Bild reported on Thursday that a student who knew him through a mutual friend said: “He wrote to his parents that he was suffering and could not go on.” She said other people at school had bullied him and that teachers had ignored him.

Kretschmer managed to get through school and graduate, but only achieved his middling grades with help from a homework tutor. “He was really an odd one, very much turned in on himself, very reserved. But he loved his cat,” the 24-year-old said.

A past fellow student told Bild newspaper: “He always had the latest mobile phone model, spent money all over the place, he was a real poser, which is why hardly anyone wanted anything to do with him.”

Although he tried to make friends by playing sports – table tennis and football, he was never good or confident enough to make an impression.

Things did not improve for him with a change of school last August, when he left the Albertville school for a private training college for business and computer experts.

One fellow student there told Bild: “He was really bad, only got E and F grades, the boys called him a loser.”

It seems he had a girlfriend, but she is said to have finished the relationship recently.

The authorities also confirmed they had found a number of shooter computer games such as Counterstrike on his computer as well as horror films.

But police cautioned such video games are common among teenagers these days and Helmut Rau, state education minister said in a press conference on Wednesday evening: “He was a completely normal student, who was never in any way conspicuous.”

He said the Kretschmer home was financially secure, with parents who valued nice clothes and big cars. “There are obviously students who have a double identity, of which we know nothing,” Rau said.