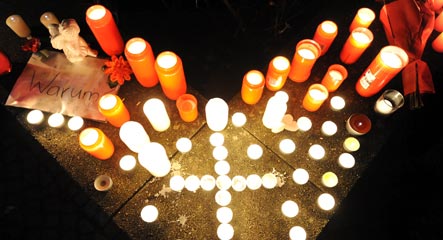 Tim Kretschmer, the 17-year-old who shot himself dead after his killing-spree, has been described in initial reports as a low-key loner and a gun-lover. But police have yet to say what caused him to run amok at his former secondary school in the town of Winnenden on Wednesday.

After shooting dead nine pupils and three teachers at the Albertville school, Kretschmer fled the scene and went on to kill three other people before he was wounded in a shoot-out with police.

All but one of the students were girls and all three teachers were women, leading to speculation his rampage might have been gender related.

Police chief Ralf Michelfelder told public broadcaster ZDF on Thursday the investigation had continued through the night and the authorities would hold a press conference later in the day to discuss the likely motive.

Baden-Württemberg’s Interior Minister Heribert Rech said the bloodbath could have been far worse had police not arrived on the scene two minutes after the first call for help. “There was countless unused ammunition,” he told a press conference on Wednesday evening.

Several hundred people packed into the overfilled St. Borromäus church in the town of 27,000 on Wednesday night to mourn together and Helmut Rau, the state education minister, called on Baden-Württemberg schools set aside time on Thursday to discuss the incident with students.

Flags flew at half mast across Germany on Thursday as the numbed nation mourned the 15 victims and hundreds of candles were left outside the school in the picturesque town.

An amateur video of the gunman’s final moments has also surfaced online. Apparently a bystander filmed Kretschmer’s shoot-out with the police in a car parking lot.

The grainy video shows him firing at officers before kneeling down. An edited version then skips to him lying dead on the ground as police swarm around him. Kretschmer was reportedly hit in the leg by the police, which caused him to turn his gun on himself.

“He fell down, got up again and reloaded his gun. He was found soon afterwards dead,” Rech said. State police chief Erwin Hetger said.