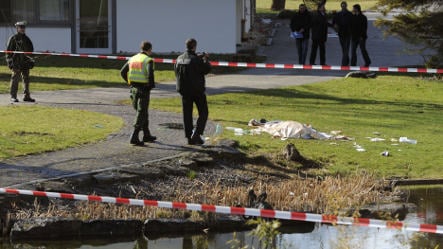 The shooter – which the Germany’s biggest tabloid newspaper Bild has identified as 17-year-old Tim Kretschmer – prompted the authorities to seal off the small town of Winnenden after he fled from the bloodbath at the Albertville secondary school.

He murdered eight school children aged between 14 and 16, as well as three teachers at the school, storming two classrooms seemingly at random. Several other people were injured, one of whom died later from their wounds.

He then fled, prompting police to seal off the small town which is located some 20 kilometres northeast of Stuttgart. But he had run through the grounds of a nearby psychiatric clinic where he shot dead a member of staff before hijacking a car and forcing the driver to head towards Stuttgart.

A police spokesman said later that once Kretschmer decided to flee, the planning he had done was no longer relevant.

A massive manhunt was under way, with hundreds of armed police commandos and snipers in black body armour on his trail, assisted by helicopters and dog handler teams.

When he hit a traffic jam caused by the police operation, he forced the driver to turn around and head north again, ending up in Wendling. Taking a sharp corner the car came off the road and Kretschmer ran into a small trading estate.

There he embarked upon a shoot-out with armed police units which had surrounded the area. Two passersby were killed and two police officers were seriously injured before the gunman was shot in the leg by police before he then apparently turned his weapon on himself.

“He was constantly reloading his weapon,” Gelden said.

Kretschmer is said to have entered the secondary school at around 9:30 am on Wednesday. He reportedly said nothing before starting to shoot.

A police spokesman has told reporters that he was known to the authorities – and that his parents legally owned up to 18 firearms.

His mother’s house has been searched by officers and she was questioned. Reports suggest one of the weapons was missing from the family’s collection.

Around 1,000 pupils at several nearby schools were either evacuated or locked in classrooms although some had jumped out of windows to escape the chaos. The school’s website which said he had graduated last year, has crashed.

“This is the biggest catastrophe that can happen to a school,” said Helmut Rau, Baden-Württemberg’s education minister. “The soul of the school is wounded deeply.”

Rescue services flooded into the town of 27,000 and the authorities closed much of Winnenden’s centre.

German President Horst Köhler expressed his shock at the killings. “My wife and I were filled with horror and sadness upon hearing about the rampage in Winnenden. Our thoughts are with the victims and their friends and family,” he said in Berlin.

The authories have set up a hotline for family members seeking information: 0711 904 40949