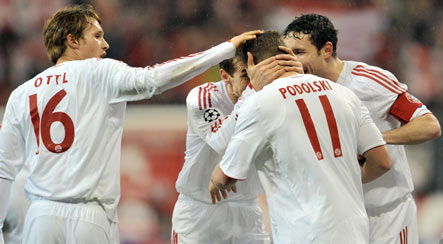 “We wanted to show from the first second who was the boss,” said delighted Bayern coach Jürgen Klinsmann. “The team took this game very seriously. Sporting realised we weren’t going to give them anything and we now have ten busy weeks ahead of us.

We need players like Lukas Podolski to be at the top of their game and he showed a cast-iron will today.”

Luca Toni and Franck Ribery had both scored two goals in Lisbon a fortnight ago in the first-leg Round of 16 tie virtually to ensure Bayern a last eight spot when Sporting were hammered 5-0 in Portugal. Both Italy’s Toni and France’s Ribery were missing with injury for the second-leg, but their absence was barely felt.

Having totally dominated in Lisbon, Bayern carried on where they left off as Brazilian midfielder Ze Roberto flicked a pass to Podolski, who lobbed Sporting goalkeeper Rui Patricio after just seven minutes.

And having scored in the 5-1 hammering of Hannover in the German league last Saturday, Podolski made it three goals in two games with an opportunist bicycle kick after a Patricio, error which he smashed into the net on 34 minutes.

And things went from bad to far worse for the guests when Sporting defender Polga knocked a cross into his own net on 39 minutes.

Lisbon captain Joao Moutinho hit a superb dipping effort into the top left-hand corner on 42 minutes to peg the arrears back to 3-1, but Germany midfielder Bastian Schweinsteiger scored less than two minutes later to make it 4-1 at the break.

Munich teenager Thomas Müller took over from Schweinsteiger and the

19-year-old had played just two minutes of his Champions League debut when he set up Bayern’s fifth goal after 74 minutes.

Müller beat the Sporting defence on the right and put in a pin-point accurate cross which Miroslav Klose headed back for captain Mark van Bommel to drill home.

defender Pedro Silva, but the Germany star picked himself up from the turf to drill home his penalty on 82 minutes.

And Mueller profited from a saved shot from Podolski on 90 minutes when he was presented with a simple tap-in as Bayern became the first team to score 12 goals over two legs in a Champions League knock-out tie.