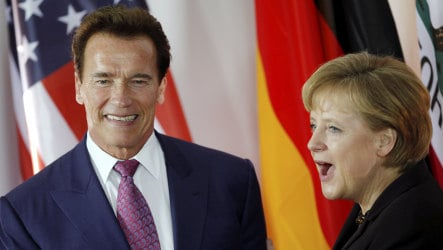 Schwarzenegger, this year’s guest of honour at the sprawling CeBIT fair in this northern German city, toured stands with Chancellor Angela Merkel as the six-day event opened under a cloud of economic gloom.

In a rollicking speech late Monday to kick off the industry’s largest gathering, Schwarzenegger drew on references from his career as a bodybuilder, actor and entrepreneur to pump up his recession-knocked audience.

“We are gathering in challenging times. Some may say this is the wrong time for a big trade show like this but they are wrong,” Austrian-born Schwarzenegger said.

“Losers whine but winners move forward in a strong and powerful way and I know that everyone who is here at the CeBIT is a winner!”

Speaking in English and later in German with his strong regional Austrian dialect, Schwarzenegger said he was pleased to be back in the country where he got his start as a bodybuilder and looked forward to enjoying some “German beer and German food” again while in town.

“Never in my wildest dreams did I ever imagine I would come back to Germany as governor of the great state of California,” he said.

In a nod to his state’s budget woes, he noted the CeBIT’s reputation as a major business generator and smiled: “I wish I had some of that money.”

“What an inspirational leader she is,” he said, noting that she now even had a Barbie doll made in her image. “That’s really a sign you’ve arrived,” he joked.

And he brought the house down at the end of his speech with a “Terminator” adieu: “I’ll be back. Hasta la vista, baby.”

Merkel, who is facing Germany’s worst postwar recession and a general election in six months’ time, thanked Schwarzenegger for bringing “a little American spirit” to the northern city of Hannover.

She urged high-tech business leaders to seize the opportunities presented

by the crisis, joining Schwarzenegger in a call for more “green,” energy-efficient technology.

“I think there is such a thing as truly safe investments in the future,” Merkel said.

“For me they are in the area of information and communications technology, for example,” noting that she had earmarked millions for expansion of broadband internet networks and more computers for schools in two recent economic stimulus packages.

While in Hannover, Schwarzenegger will also pick up an award from the American Chamber of Commerce in Germany for “his exceptional commitment to the global issues of environment and energy.”

California is the honorary guest at this year’s CeBIT and Schwarzenegger has come to the CeBIT with around 50 firms from California, most from ailing Silicon Valley.

The German press had hoped the “Governator” would give the event a shot in the arm this year.

Some 4,300 firms from 69 countries are displaying the latest gadgets and IT innovations at the fair – a quarter fewer than last year due to the global economic slump.

That contrasts with the more than 8,000 exhibitors that attended in 2001 during the “new economy” heyday.

Turnover in information technology, telecommunications and digital consumer electronics will hold steady at about €145 billion ($183 billion), the BITKOM industrial lobby.

Hot topics at this year’s fair are expected to be reducing the high-tech industry’s carbon footprint, “e-health” using the internet to revolutionise health care and the rise of ultra-thin netbooks and electronic books.

The CeBIT runs until Sunday.