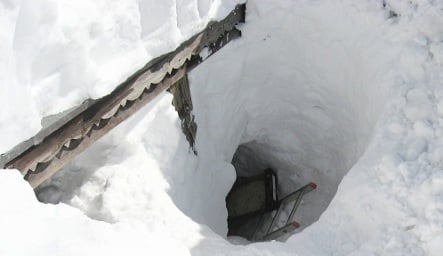 The woman lives at 1,500 metres (4,920 feet) on the Geigelstein, the second highest peak in the Chiemgau Alps. She called emergency services some time after the slide covered her hut under four metres (13 feet) of snow on Monday.

“I still have enough provisions for three months, but it’s getting a bit sinister here,” Bild said the woman told the dispatch centre.

On Wednesday, mountain rescuers arrived and dug her out even as extreme avalanche danger in the area persisted, flying her to safety in a helicopter.

Heavy snow in the Alps has caused numerous accidents and closed motorways due to extreme avalanche danger, and five people have been killed in snow slides in the last week, news agency DPA reported on Friday. Some ski areas have also closed because of unstable snow conditions.

“Those without experience should not be on the slopes,” head of Bavarian avalanche warning service Georg Kronthaler said.

Meanwhile more snow is expected in the region on Friday. Though sunshine should break through the clouds by Saturday, experts warned that warmer temperatures will increase avalanche risk as snow settles and melts.