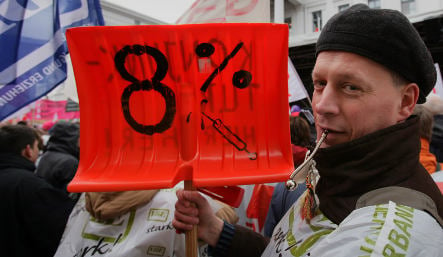 Tens of thousands of civil servants from different sectors in the states of North Rhine-Westphalia, Baden-Württemberg, Saxony and Saarland took part in the temporary strikes before their union, Verdi, was to negotiate with the state wage association TDL on Saturday.

Verdi, along with unions GEW and dbb, represent 700,000 state workers who are demanding an 8 percent wage increase. The state employers have offered a 4.2 percent increase that would begin in July and last for the next two years.

Head of the dbb union Frank Stöhr told news agency DPA that his group was optimistic about the negotiations, but said the employers would have to make some compromises.

“And the unions also know there will have to be a compromise in the end,” he said.

Meanwhile deputy head of the employers‘ association Rainer Speer told DPA that his group would not be making a better offer and encouraged the workers’ unions to accept, saying it had been presented “without any tricks.”

The third round of negotiations between German states and unions ended without an agreement on February 14 in Potsdam. The TDL state wage alliance offered the wage increase of 4.2 percent – their first offer since negotiations began. But the union officials rejected the offer, scheduling more meetings for February 28 and March 1.

Unions have called for limited warning strikes across the country in recent weeks as the wage dispute escalates. Workers from two of Germany’s 16 federal states, Hesse and Berlin, are not participating in the strikes or negotiations.