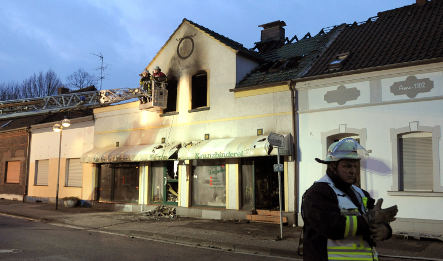 The 34-year-old woman’s husband was able to save himself by jumping from the top-floor apartment, but rescue workers did not arrive in time to save her or their daughters, aged one and three, and five-year-old son, police spokesperson Jürgen Müller said.

“There is no evidence of arson,” Müller said, adding that the investigation was ongoing.

The 34-year-old father was hospitalised after landing on a flower shop awning as he jumped some 5 metres (15 feet) from the apartment.

“After the jump he said that his wife and children were still in the apartment,” Müller said.

A witness reported the fire just before 1 am and some 100 fire fighters were able to bring other residents to safety. The city provided a psychotherapist for people to speak with.

The fire was still not completely put out by daybreak.