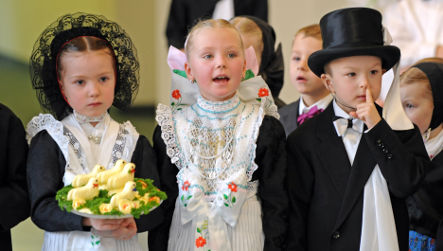 Wee Sorbian speakers from the state of Saxony in a children's play. Photo: DPA

“The death of a language leads to the disappearance of many forms of intangible cultural heritage, especially the invaluable heritage of traditions and oral expressions of the community that spoke it – from poems and legends to proverbs and jokes,” UNESCO Director-General Koïchiro Matsuura said in a statement on Thursday.

Of the some 2,500 languages on the list, UNESCO found that the northern German languages of Saterlandic, which has just 1,000 speakers, and North Frisian, with less than 10,000 speakers, are both “severely endangered.” This category is defined by language that is spoken by grandparents and older generations who have children that understand the language but don’t teach it to their children.

The vitality of Romani, Sorbian, South Jutish, and Yiddish is slightly less threatened in the category of “definitely endangered” in Germany – which means children no longer learn the language as mother tongue in their homes.

Alemannic, East Franconian, Limburgian-Ripuarian, Low Saxon, Luxembourgish, Rhenish Franconian and even Bavarian are spoken by fewer people each year and are therefore “unsafe.”

Wars and expulsion are often the main reason for dying languages, Matsuura said in the statement. Migration is also a threat to language diversity, he said.

The new online interactive atlas was compiled by 30 linguists and provides data for some 2,500 endangered languages worldwide, UNESCO said.

Of the 6,000 existing languages in the world, more than 200 have become extinct during the last three generations, the report said. Another 538 are critically endangered.

“It would be naïve and oversimplifying to say that the big ex-colonial languages, English, or French or Spanish, are the killers, and all smaller languages are the victims,” linguist and Editor-in-Chief Christopher Moseley said. “It is not like that; there is a subtle interplay of forces, and this atlas will help ordinary people to understand those forces better.”